Candy Gourlay has always written about people from the Philippines, and in her third novel she has stepped even deeper into her country and further into its history. The result is absolutely magical. 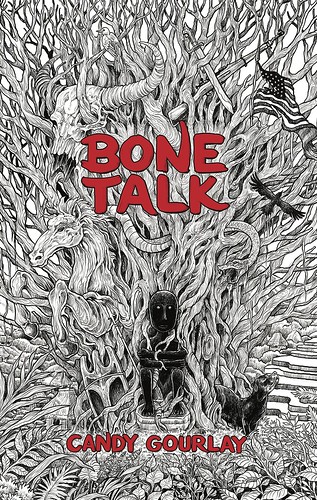 Set in 1899 in a small village in the mountains, people live pretty much as they have always done. Ten-year-old Samkad and his friend Luki, who’s OK despite being a girl, play as they’ve always done, when the day comes for Samkad to become a man, i.e. to receive the ‘cut.’ They are very much bound by tradition and the older men rule the village.

They have deadly enemies – the Mangili – and are always on the look-out for them. It’s how you stay alive. But at ten Samkad isn’t quite as mature or knowledgeable as he thinks, as he discovers when many bad and surprising things happen in quick succession.

But of course in 1899 the whole country also have enemies, having been invaded by America. In Bone Talk the two worlds meet, and things will never be the same again. Samkad might have started out charmingly naïve, but he grows and does become a man, and it has little to do with the cut.

It’s hard to call a story about this difficult time lovely, especially considering that so many bad things happen. But it is lovely; a real must-read. While I really, really liked Candy’s first two novels, this rather surpasses them. There is truth in the saying that you should write about what you know, about your place, your country, your people.

Read Bone Talk, and discover the other side to the Philippines. The side we didn’t know.