Honestly, they didn’t look that historic. Theresa Breslin and Holly Webb had a full house on Saturday afternoon, Terry Deary in the Main theatre notwithstanding.

Theresa has written around 40 books, but Holly easily beats that with an exact 128 ‘quite short’ books. Daniel Hahn, who chaired this unusually young [for him] event, asked how Theresa’s The Rasputin Dagger came about. She said she saw this gorgeous bejewelled dagger at the Topkapi Palace in Istanbul, and when Mr T refused to steal it for her she needed to put it in a book.

Holly’s book The Princess and the Suffragette started with A Little Princess, and her favourite The Secret Garden (which apparently caused her to draw maps, badly). She didn’t want to centre her story on Sara, but chose little Lottie – the girl who was only four when she was sent to boarding school – instead. 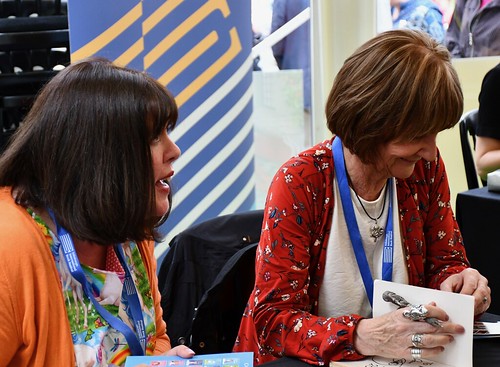 Research is all very well, but it should make a story, and not just a list of interesting facts. Holly discovered the changing skirts. When skirts got wider, women could take longer steps and walk faster. Women were supposed to be well behaved, but ignorant.

Siberia was part of Theresa’s research for The Rasputin Dagger, and there’s the vast difference between a life filled with jewels and a life of starvation. She read us the part where the women protest against having to queue for bread and how this eventually led to Russian women getting the vote earlier than in most other countries.

The reason Theresa started to write was she read books and wished there’d be more, so she wrote the continuation of what had ended too soon. She always wanted to be the heroine in the books she read. Whereas Holly didn’t want to write at all, and was glad to discover she could work for publishers, reading books and editing.

An excellent question from a girl in the audience was about what’s unfair to women in the world. Theresa mentioned things like women not being allowed to drive in some countries, were not allowed to go out freely, that they receive limited information. Holly pointed out that women are paid less and are always the ones expected to look after children.

A very crafty young lady asked four questions of each as the ‘last’ question of the session, when there was very little time left… Of their own work, both authors prefers the latest book, and Holly admitted to feeling that her first book would improve if she were to rewrite it. The best thing about being an author for Theresa is that she gets invited to events like this one, and the worst that she has to know ‘what comes next.’ Holly likes working from home, but it’s hard having to finish writing something.

This event was aimed at eight to twelves. Holly has many much younger fans, and there were a lot of five-year-olds in the audience. Parents take note?