They were queueing for returned tickets from late morning on Saturday. That’s how much in demand Philip Pullman is, and will help explain why the book festival organisers had been after him to come back here for years. Last time, I believe, was when Philip had a couple of bishops to chat to in his event, so it must have been for his book on Jesus, in 2010.

But, she who waits for something good… and all that. 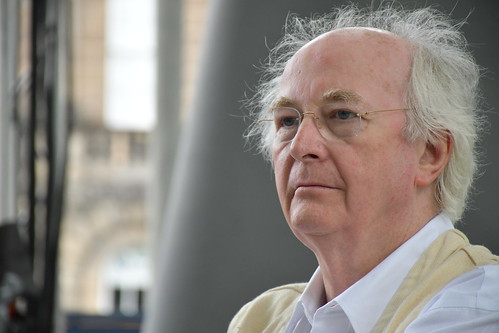 Philip did not sign books in the bookshop after. Luckily I discovered this before joining a non-existent queue. But with the new main theatre so enormous, I can understand that signings will be considerably harder than they used to be, when popular authors – well, it’s why they will have been put in the main theatre in the first place – could easily spend a couple of hours and more.

He did, however, sign as many books as there was time for, or maybe until his hands dropped off, before the event, so if you’re quick, you might still be lucky.

Val McDermid was the one chosen to chat to Philip, and you can’t really go wrong with Val. Although, I was quite shocked to discover that it was David Fickling who killed Frederick Garland. Or at least, was an accessory to the killing. Hmm. 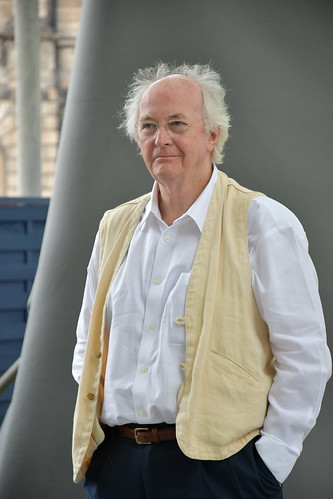 It’s good that it wasn’t only Philip’s recent Book of Dust that got an outing, but that many of Philip’s books were covered. While Daughter didn’t manage to ask her burning question regarding more Sally Lockhart books (just hurry up with Dust!), it’s good to know they have not been forgotten.

To portray a strong woman, you don’t have to portray a man as weak. Obvious really, but not something everyone understands. Philip does have some of the best female characters, but there is nothing wrong with his men, and boys, either.

And as all wise authors do, he pointed out that we really need school libraries, and there needs to be librarians in them. People who can point readers in the right direction, based on what they’ve read already. People who read, in fact.

This sold-out event was great, and not surprisingly was attended by many of the festival’s guest participants. They could probably have run several events. 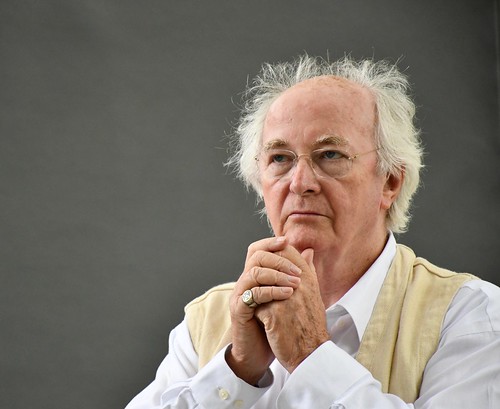