The Invisible Man From Salem

Except I read it in the original, so it’s really Den Osynlige Mannen Från Salem. But at least this way you know that you, too, can access Christoffer Carlsson’s award-winning first crime novel featuring Leo Junker. Because I think you might want to.

Admittedly, I hate the kind of society he’s writing about, but firmly believe that this is what people in other countries find so charming about Swedish noir. Life is dark and dismal, but because it’s not your dark and dismal, it’s all right.

This is an adult crime novel, but with enough flashbacks to Leo’s youth in a concrete-covered Stockholm suburb in the mid-1990s, that it can almost double as YA. Almost. 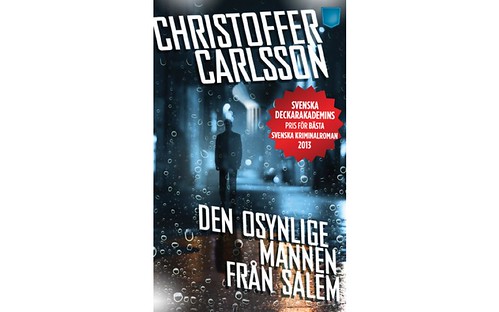 Leo has been relieved of his police badge after some dubious goings-on on Gotland. Not his fault, but a scapegoat was needed. And now a woman has been murdered in the flat below his, and he feels he could do with something to occupy himself with, in his half-drugged, sad state. And then it turns out it’s all much closer to home than he thought.

Maybe something to do with his friends from sixth form college? The police don’t like him much, nor do people from his past private life. It’s been tough, and the drugs are just about understandable.

There are no charming vicarages here. Very little that is nice at all, in fact. There is so little hope, even. I was glad I’d got out. Despite this being set 30 years after I was that age, it felt as if nothing had changed. I could have gone to that school. Those teenagers could have been my classmates.

And it’s also very well written, and after a while I sort of liked Leo. A little. When I reached the end I did what any sane person would do and started on the attached sample chapter for the second book. Apart from having other books to read too, there is the slight conundrum of me only having the fourth, and last, book to hand. On Christoffer’s advice.

(There are more than a few nods to Sjöwall & Wahlöö’s Martin Beck series.)