That wonderful feeling when you go from having zero friends to having one? Yes, that one.

In Barry Hutchison’s Anty Hero, for Barrington Stoke, Zac is the class weirdo with no friends. And then Ant arrives and he’s even weirder, but at least Zac has a friend and a better status, and Ant is quite nice. Apart maybe from those odd glasses he wears. 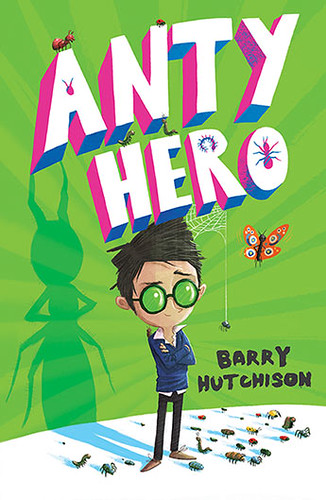 What could be behind them? Well, as an – old – adult, I immediately thought he might be a fly mutant of some kind. He’s not. Ant is… well, consider his name, and use your imagination.

Theirs is not a school where it’s a good idea to be different. The science teacher is rather too keen on unmasking poor Ant, and he has a good supply of insect spray.

What can Zac and Tulisa, his second new friend, do?

Plenty, is the answer. And there is plenty more help as well. As long as you’re not squeamish.

Great little story for anyone who doesn’t mind some creepy-crawlyness. And we can all be brave.