Sven Wernström died last week, a few days before the Swedish elections, and on the day the Swedish Academy finally got together again to try and make things better.

I knew I’d blogged about Sven before, but had to do a search to see when and what about. On here I wrote about losing hope. That was a couple of days after the referendum which plunged us into more despair than I could imagine on that day. And we still had the US presidential election to come. Little did we know.

Checking Swedish Bookwitch I found more posts; interestingly both posted on the same date, a few years apart. One was an almost regular thing on some of Sven’s books. The other was about discovering his blog, where he sought solace after his wife of almost seventy years had died.

He lived another five years, making it to 93, which is good going. Checking his blog just now, I found Sven had not written for a while, and all his last posts were about death. So maybe he’d been diagnosed with something and had been ill since. Or he was ‘just’ feeling low.

Sven was a dedicated communist, and wrote books for children and teens in what can be said to be fairly red terms. That’s why the Retired Children’s Librarian didn’t care for most of his writing. When I read about his death, there were others who felt the same way, but also some who praised his books for what they’d meant to them. So, as with the elections last Sunday, we are all divided and all different. Which is how it should be.

I’m guessing that those of us who loved his books, might have done so because at a young age you are less into literary merit, or the lack of. I’m also going to assume that those who still dislike his books, are of a different political persuasion. As for me, I don’t reckon I will reread the books I still own. I’m not sure I would be able to see which of the opinions is more right than the other, and I don’t want to lose my memories of what once seemed great.

And perhaps by today it is good that Sven has been reunited with his Inga. I hope so. 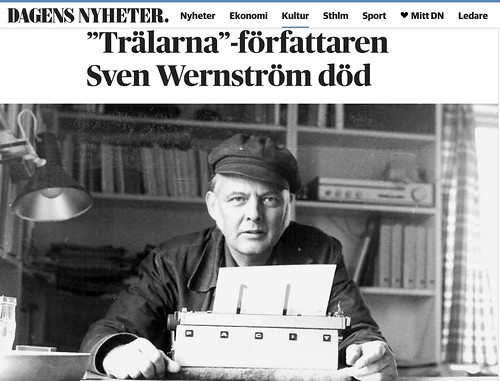 (Dagens Nyheter articles are behind a paywall…)