George and the Ship of Time

The sixth and last book about George, and I’d been on tenterhooks ever since Lucy Hawking had him jump aboard a spacecraft heading into outer space at the end of the fifth book. It’s a good cliffhanger, but I was sure George would soon be back on Earth again, among his friends.

I was right. Sort of.

George and Boltzmann, the robot, return to Earth after first having failed to turn the ship around. But it’s not exactly the place they left; it’s hot, dusty and deserted. But Boltzmann assures him they are ‘in Foxbridge’ where George lives. Lived. 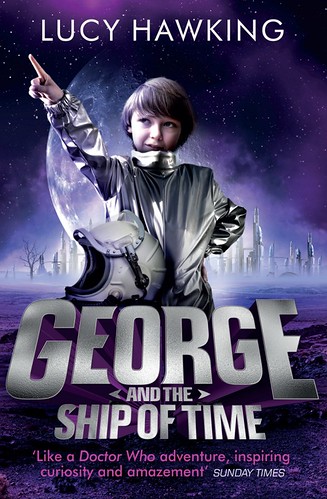 After a slow start, where I kept expecting things to become clear and a bit more normal, this story turns into a fully fledged time travel dystopia. Where the earlier books have featured criticism of aspects of modern life and the way science and the environment are ignored by the government, this is much more serious.

The duo do meet up with humans, and other creatures, odd robots, but they live in the future. George is seen as strange, if not downright dangerous. They’re in Eden, which is paradise. In a way, at least.

There is much that is dysfunctional in this place, ruled over by a tangerine coloured man by the name of Trellis Dump. The second Trellis Dump. I’ll leave you to interpret that as you see fit.

The reader keeps thinking that this can’t really have happened. If this is the future, then George’s family and friends must be dead. But if this Dump era can be reversed, then the people alive now would cease to exist. It’s quite a conundrum, and I won’t tell you how it ends.

I would like to think that those who read this book will have, or adopt, sensible opinions regarding war and destructive weapons, and climate change, and possibly even oddly coloured politicians.

The really shocking aspect about all this is how long the war lasted.

(As always, illustrated by Garry Parsons, and at the back of the book there are scientific papers aimed at its young audience. But I missed one by Stephen, as he used to sign off.)

One response to “George and the Ship of Time”