I frequently give thanks for the writing of Hilary McKay, but never more so than now, on the publication of The Skylarks’ War. This story, which we got a sideways introduction to in Binny in Secret, the middle book about Binny, is an absolute delight, even though it’s about WWI and there will be tears, and you weep with happiness as well as that awful sadness that accompanies war stories. Who will die?

Born soon after the turn of the century, Clarry has always felt guilt over killing her mother in the process. But she has her older brother Peter and their cousin Rupert, and the three of them have their summers at the grandparents’ house in Cornwall. That’s a good thing, as Clarry and Peter’s father is a sad example of parent; one who is neither horrible, nor kind and loving. 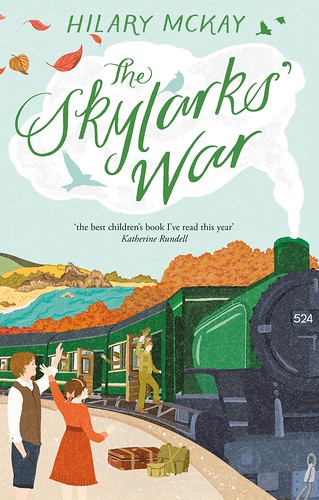 It is Clarry’s good nature and positive outlook on life, despite being a murderess, which make this book. The boys have to be boys, go to boarding school, be manly, and go to war, while Clarry is expected to stay at home and attend the Miss Pinkses’ Academy where nothing useful is taught.

As always there are many unusual and interesting characters, and they are what make the book, and it is they who help Clarry develop. And still, someone has to die. There is a war on. There is much on feminism, in a quiet sort of way, and you finish the book determined to do as well as Clarry. Except you know you can’t.

Did you know that back then it wasn’t too difficult to transport a horse from one part of the country to another? Trains had horse boxes and you simply put the horse on the train.

Excuse me for a moment. There seems to be something in my eye.

2 responses to “The Skylarks’ War”