They will have to ‘try and save the world.’ That’s the ‘Rockborn’ who are on the side of good. They might look like monsters, but on the inside they are as normal as they were before they were changed by the strange rock from space. It’s just hard for the rest of the world to see past the monstrous outer skins and shapes of our heroes.

Michael Grant’s Villain, the second book about the Gone world after Perdido Beach, is – if possible – gorier than the first. I found Monster hard to cope with, and it was the same with Villain. Until you get into the swing of things and can unthink the horror, hopefully also unsee it, these are unbelievably horrific books. (Or I’m just innocent, protected until now. Yes, that’s probably it.) 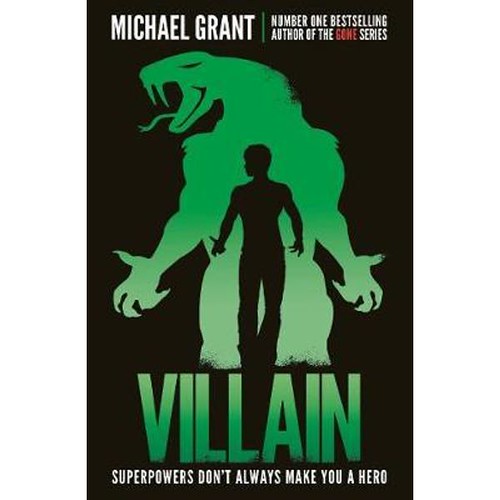 Villain has, like Monster, the same spirit that readers found in the Gone series; normal teenagers who suddenly find themselves in impossible situations, and this time it affects the whole world. No one is safe.

After the Golden Gate Bridge and the port of Los Angeles, Michael is now gunning for Las Vegas. And you don’t want to know what he does there.

More monsters have woken up, and everyone’s having a go at the killing and the maiming. But as I believe I have suggested before, you can read with your eyes shut, so you don’t see so much.

In Monster we had various individuals and groups, and they are now gathering to work as a bigger group, doing their world-saving thing.

But it seems as if what made them like this didn’t only come from space, but perhaps they are being controlled from there too? Who wants to destroy Earth? No doubt we will find out, and I hope there will be something left, and that there won’t be more mayhem in another series of books…

As it says on the cover, ‘contains scenes of cruelty and some violence.’ Some violence? Really?

One response to “Villain”