Race to the Frozen North

‘How does she know so much of what happened?’ I – almost – asked myself when reading Catherine Johnson’s book for Barrington Stoke about Polar explorer Matthew Henson, who was the first man to reach the North Pole in 1909.

The answer, of course, is that authors make things up, but apart from ‘knowing’ what the young Matthew might have said to his sister the night he ran away from home, the facts are facts. Catherine is telling the story of this black man who worked so hard to reach his goal, but whose success was mostly ignored for so long, because of his colour. 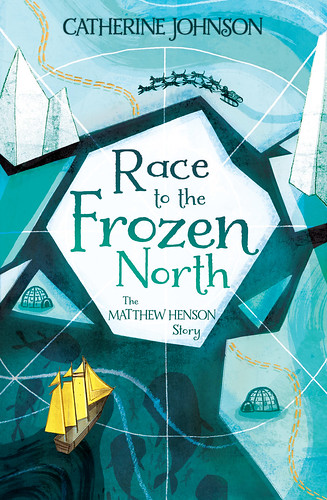 Matthew was a good worker and clearly talented, learning several languages and acquiring many useful skills, despite his humble beginnings. It feels good to read about a man like him, and I hope that countless children will be inspired by what Matthew achieved, and will feel that they, too, can make something of themselves. Early background and colour should not stop you from trying anything.

The not surprising course of events after he reached the Pole, was that others of his expedition were rewarded, but not Matthew. Decades later, he gradually gained recognition for what he did.

This makes for very exciting reading, and the pride you feel, both when he learns new skills, and when he arrives at the North Pole, is considerable.