Why do they do it? Why do authors even bother to get out of bed before the crack of dawn, to travel for hours, possibly with trains breaking down or getting cancelled, or driving hundreds of miles in their own cars. This is before they even stand up in front of school children in classrooms, talking about books, writing, reading, to audiences maybe not terribly interested. Possibly they will be told off by teachers for drinking coffee from the wrong mug in the staff room. And then they go home again, always assuming their transport works. Or they stay overnight, in dubious hotels, eating badly, before repeating the whole thing the next day.

Yes, there is – can be – money in it. Authors need to eat too. Their books will get better known. And [some of] the children will benefit from the visit by a real, live author.

But it must be so tiring.

This whole subject came up on Facebook, again, the other week. A few of those who know what it’s like, gathered to discuss travel – and other – disasters, again. Barry Hutchison told us about one of his first author outings, quite a few years ago, and I’m reproducing it here with Barry’s permission: 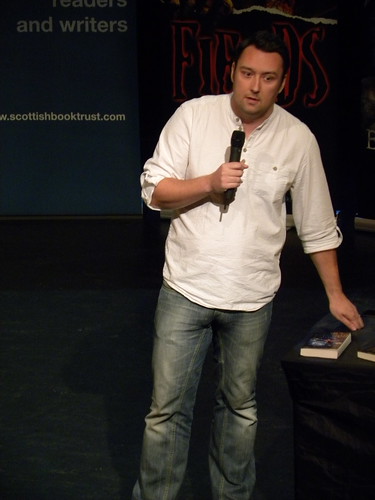 “When I was just starting out, I went on a tour with HarperCollins, where myself and a few other authors visited schools around London.

One school we went to really shocked me. The teachers openly admitted they couldn’t teach the kids, and were basically just containing them until they were old enough to leave. The police were called in most days. None of the teachers had the faintest idea why we had bothered to come to the school, and told us we were wasting our time. They laughed when someone from Waterstones turned up with books to sell.

We were split up into different classes. The kids I spoke to were around 14 to 15 – older than the target audience of the one book I had out. They talked among themselves during my talk. A few of them took time out to look me up and down, whisper something to their mates, then burst out laughing.

I had 30 minutes to talk to them. After 20, I was so thrown-off by everything that I ran out of things to say. I asked if anyone had any questions. Someone said, ‘Is you a paedo, sir?’ and everyone laughed.

The teacher said nothing.

I had maybe a minute left. I asked if anyone enjoyed writing stories, and one boy down the front, who had been staring at his desk the whole time, saying nothing, raised the tip of a finger.

All eyes turned to him. His hand went down. He told me that, no, he hated it, but his mum sometimes made him do it as a punishment.

I said no more about it.

At lunchtime, we brave authors sat at a signing table, swapping horror stories, books piled up around us that nobody was going to buy.

After 10 minutes or so, Waterstones started packing up. We were just about to leave when the boy who’d raised his hand came up, looked around nervously, then took a copy of my book out of his jacket and asked me to sign it.

I signed it and handed it back to him. He leaned closer, whispered, ‘I’ve never told anyone I like writing stories before,’ and then about-turned and hurried off.

On the way out, I found out from the librarian that he’d asked her to borrow the money for the book. She knew she’d never see the money again, so made him a deal – she’d buy him a copy if he came to her book group to discuss it. He reluctantly agreed.

She emailed me four months later to say he was still going to the book group. It consisted of him and her.

I have no idea where that kid is now, but the thought of him has seen me through some pretty abysmal school events over the years.”

Those of us following this conversation that day all admitted to reaching for a tissue when we got to those last paragraphs. Perhaps that is why they do all this stuff. And librarians, eh?