That dreadful feeling you get when your whole existence might be at risk, because you’re a foreigner and something minor, or something not to do with you, has cropped up on someone’s horizon, and you are innocent, but can see your life, as you know it, ending. That.

In Shell Game, Sara Paretsky writes about this and much more. It’s about what her country has become. There are always unfortunate people needing help in her crime novels, but usually V I Warshawski can help them, and the law usually will allow this help to happen, sooner or later. Now though, she, and we, know there’s much less chance of this. Nothing is quite what it was, and that helplessness is masterfully described from the word go. 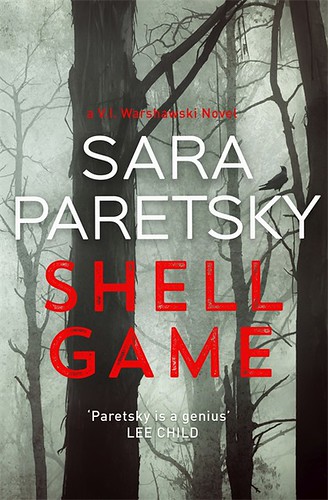 There are always people doing the wrong thing for money or power in V I’s world, but this time there’s an edge to it we’ve not encountered before. People can be bought more easily, and Government employees perhaps have tick boxes of [bad] things that have to be ticked. Just because they can.

And that leaves the rest of us struggling.

This is a story about family. Lotty Herschel’s great nephew Felix is suspected of murder, and V I gives him her support. Then her nieces Harmony and Reno – through V I’s ex-husband – turn out to be in dire need of help as well. By adding sexual abuse and a general fear of terrorists because of people newly arrived from Syria, we have everything that is currently deemed to be bad.

V I has to work harder than ever. But she’s V I, so you know you can trust her. Mr Contreras is by her side as ever, but this time I was struck by our changing world, and how mentioning his Anzio war history could very soon appear meaningless in a world that has moved on, with a new generation running it.

It’s hard to come to terms with, but I trust V I, and Sara. Someone has to write about this, and we need to read it. I imagine that even people with all the paperwork in the world to prove their right to live in their own country, could become a bit nervous on reading Shell Game.

The question is what they – we – can do.