Rennie McOwan died in early October. He was a children’s author who lived a few minutes away from us, whose Light on Dumyat was reissued a couple of years ago. If you recall, it’s a Famous Five style adventure, set on Dumyat, in the Ochils, above Stirling

The Stirling Observer published a lovely obituary last week, telling me so much more about his life. He converted to Catholicism, met the Pope and was horrified to discover that the Vatican wrote its press releases in Latin.

It looks like most of the Scottish papers published ‘the same’ obituary, and I’m hoping the link to this one works. I always like finding out more about people, but wish it could have been while they were still alive. Good to know, though, that Rennie had such a long and interesting life, and that there was much more to him than his Dumyat adventure for children. The Swede in me highly approves of his efforts to make the right to roam in Scotland a legal right.

The funeral is today. 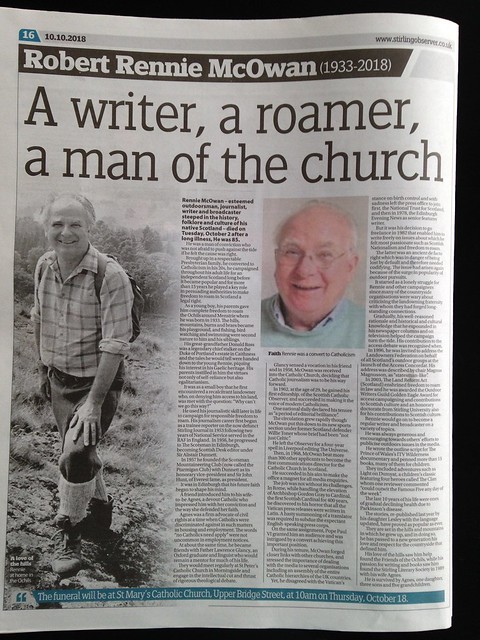 This entry was posted in Authors, Blogs, Books, History and tagged Rennie McOwan. Bookmark the permalink.