Rachel Ward’s back where I first met her, in Edinburgh, nearly ten years on. She has left behind her ‘hideously dark’ YA novels, and is enjoying cosy, humorous crime for adults. Rachel was doing an event at Blackwell’s last night, but first she met up for coffee with your witch, after a walk in Princes’ Street Gardens in the morning darkness, visiting the Royal Yacht Britannia, and going to Waterstones for [leftover] wine with Ceris from Sandstone Press, ferrying two boxes of the stuff on the bus to the other bookshop in town. That’s dedication.

The event –  Examining the Crime Scene: Three Crime Writers in Conversation – was with fellow Sandstone Press authors Lesley Kelly and William McIntyre, and I can’t tell you how good it is to ‘meet’ two authors I didn’t know at all and discovering they are fun and interesting and that I might not be totally opposed to reading their books. 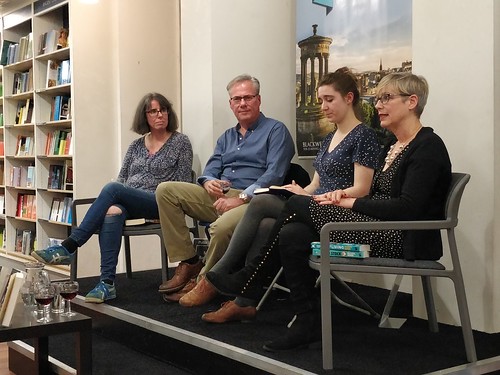 I will have to get used to events no longer run by Ann Landmann, who has left, but I dare say that will be possible. I was introduced to her replacement. I immediately forgot his name. Completely my fault. It’s my age. But I do have to say he had arranged things very nicely. Differently, but almost, well, better… Except for ‘my’ sofa, which I surreptitiously shoved a little.

Helen Grant arrived in the nick of time, having struggled with the travelling-to-Blackwell’s-for-an-event-and-trains-running-late problem. Chair Ceris allowed her authors to cheat, by showing them her questions in advance… And I didn’t get the memo, but it seems that white spots on navy or black is the way to dress. The size of the audience worried our host, because why were we all out on a Monday night, being so interested in crime? 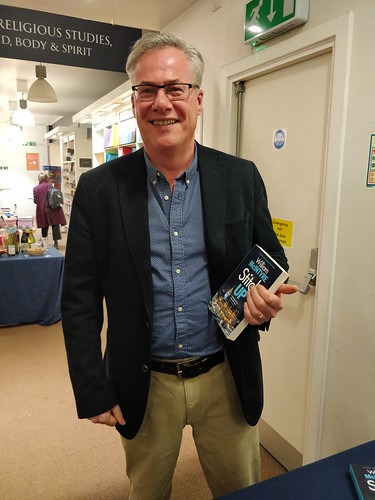 William, who seems to kill people in Linlithgow – which I find an admirable thing – believes that you should commit the crime before speaking to a lawyer. He borrows freely from his day job in the legal business and puts it all in his books, which are either nine, or four, depending on whether you count his self-published novels. It saves on research. And he says he only uses already publicly known facts. 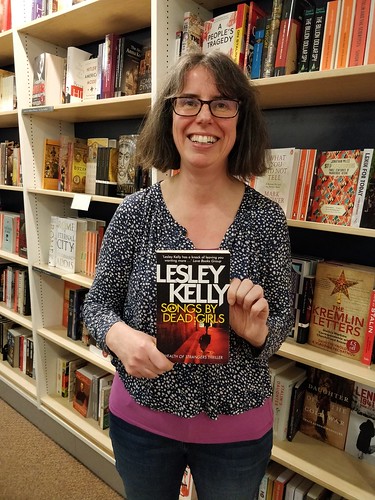 Lesley has a policeman father, but she wished she’d spoken before William, as she’s ‘not as interesting’. She used to be a stand-up comedian, and finds the two-year wait for laughs when writing a book rather long. You never know what readers want, but in her next book she kills a lot of civil servants. 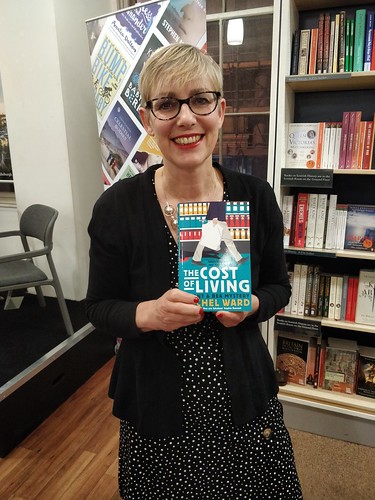 And then we have Rachel, who based her detectives on ‘a life of food shopping.’ This is a fine thing, and you can listen to and observe people in the supermarket. Everyone shops for food. The humour in her dialogue wasn’t intentional, but when she sent her husband a chapter at a time to read, she liked hearing him laugh.

None of the three authors write about sex. Well, Rachel does, a little. There was a question as to whether you have to be a bit drunk when writing about sex.

Asked whether they plot in advance, William described how you need only know some, because as long as you can see into the near distance if you are driving in fog, you will be able to reach your destination. A little at a time, and that works for writing as well. Rachel has realised that ‘plot is quite important’ and Lesley plots because she doesn’t want to get lost.

Then there was some discussion about Tom Cruise, and I’ve forgotten how many of them want him in the film of their book. Potentially all three.

And then we got to the end. Helen and I both went up to ‘Mr Ward’ and chatted. I reckon Rachel will want to lock him up, but it was nice to meet him at last.

Realised that Sandstone Press, and Ceris, are not from Perth. They are in Dingwall, and that is a very long way north. Very very.

Chatted some more with William and urged him to really let go in Linlithgow, without telling him the whole story. Tried to be professional, handing out business cards to him and Lesley. Just hope they’re not going to turn up outside my door..!

Then I grabbed Helen Grant, and carefully avoiding Fleshmarket Close, we walked to the station where we got our train home, and one of us almost told the guard he was too loud.

2 responses to “Reaching their destinations”