First Aid is always a useful skill. Although many of the corpses in Rachel Ward’s Dead Stock are beyond help. I suppose corpses generally are…

I was going to say that unlike most crime novels, Dead Stock doesn’t have any dead humans, but that’d be incorrect. There is one dead body, but you don’t notice it so much. The bad smell comes from other dead creatures. Look away now if you don’t enjoy dead cats. 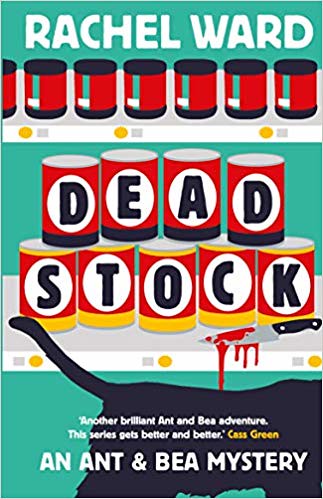 Ant and Bea are back. It’s only just past New Year, with its hangovers and disappointments. As Costsave gets ready to go in the New Year, however, the missing and/or the dead cats start making themselves noticed. But Bea is ready to solve the mystery, and Ant supposes he will help, then…

It’s always good to meet characters you know, and by now we know where we are with Bea and her mum, Ant with his family, plus the whole Costsave family, for better or for worse. And it’s not only cats, but dogs, in this whodunnit. Bea is run ragged with all the sleuthing and the caring for animals.

She has her old flame, the sleazy policeman to deal with too, as well as the new and very promising part-timer at Costsave.

The question is who is doing those things to the cats? And what does it have to do with all the rest that’s happening in Kingsleigh?

Bea is definitely the one to have on your side. She’s small, but brave. And when not brave, she still does what needs doing. (Except possibly sending her police-man properly packing.)

As usual, it’s not always the ones you think did it, who did it. But for a book about dead cats, it gets really quite exciting.