The Legend of Sally Jones

This is all about where you belong. It needn’t be the place you were born, although you will probably always miss it, while still being happy – or not – somewhere else.

Serendipity – and Pushkin Press – brought me Sally Jones, the ‘prequel’ to Jakob Wegelius’ The Murderer’s Ape. It’s not, really. But for those of us who came to Sally Jones in her second book, it will feel like a prequel. For the English language market it is a new book, just published, translated by Peter Graves. The Swedes had the original ten years ago, awarding it prizes. 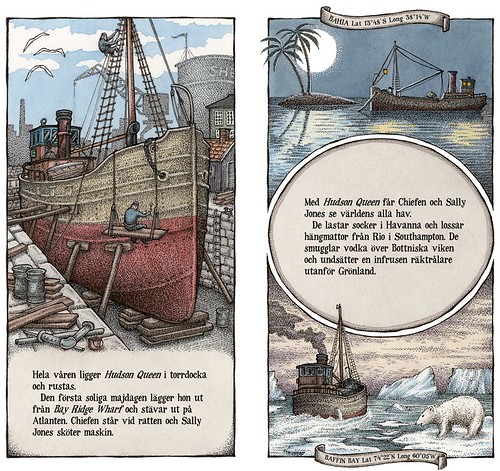 Jakob Wegelius did all the illustrations for his recent novel, but here he has really excelled. The Legend of Sally Jones is picture book; each page a work of art. Especially the back cover is gorgeous. And the story is lovely and really tugs at your heartstrings. Now we know what made Sally Jones who she is, and why she is so loyal to her friend the Chief.

Because all through The Murderer’s Ape you have to take it on trust that he deserves all the love Sally Jones shows as she searches for a way to prove he’s no murderer. When you’ve read The Legend of Sally Jones you know.

Sally Jones met some quite bad people when she grew up, but also a few lovely ones. Even her worst humans proved useful as they taught her some of the many skills she later on puts to good use. If you want your gorilla to be your slave, don’t teach them to drive.