A bit rough round the edges, but I enjoyed it. At the event with William McIntyre last month, my ears started flapping when I sensed I could hear something about a [self-published] children’s book he’d written. I had to email him to ask more. 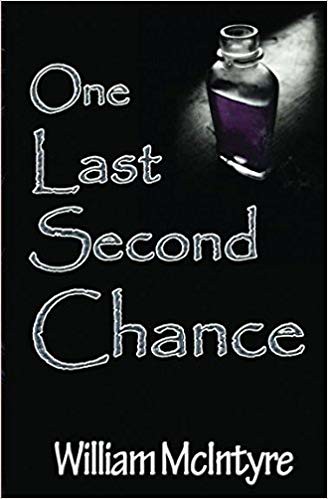 One Last Second Chance is about Walter, a conman who taught me more about cons than I ever knew I needed to know. There is Gordon –  a young boy – whose mother is dying, and for whom Gordon wants to find a cure. And there is his new, violent, neighbour, a student called Marie.

Unlikely though this trio seems, they set out to find this cure. Or hang onto it, in case it’s already theirs. But there are worse crooks than Walter; crooks who all seem to be after them.

This madcap adventure would be really fun as a film, but I would love for the two nurses  to have their roles reversed. (Honestly, such a cliché this way round!)

I really don’t want to give too much away. It’d ruin the book for you. Whereas you kind of expect Gordon’s mother to be saved, you can’t really work out how this might happen. If it does. There are some fun characters and plenty of crazy ideas. And it’s all quite Scottish. All it needs is a haggis.

Hang on, there was a haggis.