It seems that being Head of BBC Radio Scotland – and I might have got the exact correct title wrong – is pretty much like being the Bookwitch. (You come up with ideas, and then you make them happen.) 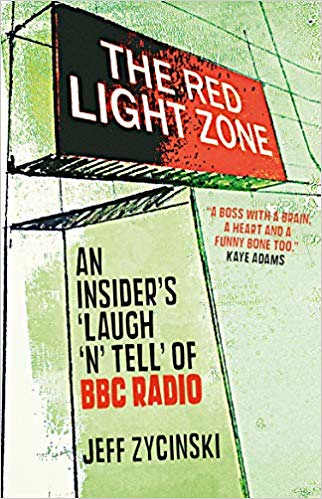 I had never heard of Jeff Zycinski. But then I don’t really listen to the radio. I sort of assumed he was Scotland’s Terry Wogan, or something, but it turns out he was more the man who came up with the idea for a programme like that and put ‘Wogan’ in front of the microphone. (Or should that be behind?) Except he did it with people and programmes in Scotland, which means no one has heard of him.

Anyway, now that he has left the BBC, Jeff is ‘telling it all’ in his book The Red Light Zone – which is a much less daring title than you might think. It’s not sex so much as the warning that you are on air. Good title, unless you are being sent it in a cryptic message on Facebook, making it look like Badger the Mystical Mutt had been hacked. (This is the first book I’ve reviewed, published by a fictional dog.)

Jeff’s 25 years at the BBC make for interesting reading. There is some gossip, and we meet the Princess Royal as well as Chris Evans, and I now know much more about the various BBC DGs down in London, but it is mostly ordinary stuff. The running of radio for a quarter of a century.

I liked it. In the end so much that it acted as a painkiller, and I also had to put up with the Resident IT Consultant stealing the book whenever I wasn’t looking. Occasionally when I was looking, because I’m a nice witch. He liked it too.

If you remove the radio aspect from this biography, it still works as a description of 25 years of life in Scotland. I like the sound of Jeff’s wife. And their children. But I would rather that the dog had lived…

One response to “The Red Light Zone”