Offspring were always too old for the Gruffalo. I’m quite relieved to discover this fact, as I tended to worry about why we didn’t read Julia Donaldson’s book. What was I missing?

I learned to recognise Axel Scheffler’s illustrations, and I fondly believed the Gruffalo wasn’t so much a monster; more an ugly, but otherwise really friendly creature.

Instead it seems there is a clever little mouse who really knows how to look after himself in many a tight corner. First he scares his neighbourhood bullies – the dangerous animals in the forest – by making up the dreadful Gruffalo. And when the Gruffalo turns out to be real, he avoids being eaten by fooling this monster, while ‘proving’ to the other animals he was telling the truth.

So, that was a surprise. 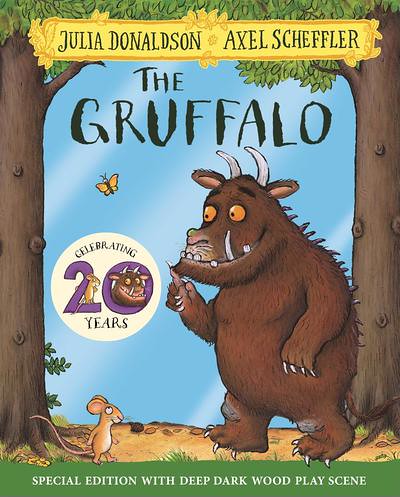 There is now a 20th anniversary special edition, with a forest play scene and cutout animals and everything. You could have lot of fun with that. Because judging by the queues for Julia Donaldson wherever she appears, her books remain extremely popular, and the Gruffalo is very well known. Look at me, I knew it without knowing it, or even being right about the book. We all know something.

(I still think he looks adorable, and that mouse is a sneaky little thing.)