A Step So Grave

‘Ach bash mash buch.’ I really have not paid enough attention, even to what I myself have listened to, written about or read. This quote, which might even resemble Gaelic for all I know, is from the 13th – the 13th!!! – Dandy Gilver mystery by Catriona McPherson.

I have seen Catriona in events and found her really interesting. But did I hear what she was saying? Clearly not. When A Step So Grave arrived and looked so very enticing, I read the press release. Or did I? I seem to have noticed what it was about, but not that it was the 13th Dandy Gilver book. 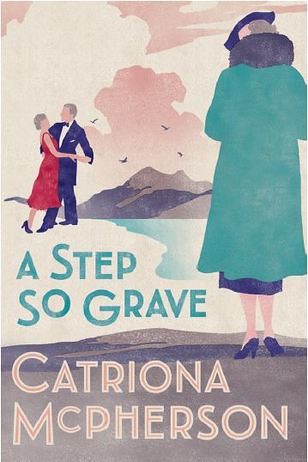 Admittedly, it didn’t take me long to discover that the good Mrs Gilver had detected crimes before, now that she has stumbled on a murder at her son’s fiancée’s home. But 13?

Anyway, you’ll be glad to know that this book was just as good as I’d thought it would be. Better, even. And it would seem there are another twelve before it, should I find myself at a loss for what to read.

Set in the 1930s, which is very much a favourite period of mine for murders and detecting, this takes us in the direction of Plockton, which I’ve still to visit. It lets us move among the rich and entitled, and whatever you think of them, it’s fascinating. These ones, I mean the ones who are ‘hosting’ the murder, speak Gaelic, which goes a bit like ‘bee yellow oak banana,’ although it means something quite different. The English Dandy almost finds herself in a foreign country, despite residing in Perthshire, with her wealthy husband Hugh, and their two sons, the elder of whom is marrying the daughter of an old friend of Hugh’s.

This is newly written classic crime, where the detective has a maid who doesn’t mind helping with the detecting, along with Alec, Dandy’s partner in crime-solving. Before they are done, the reader goes from suspecting one character to another, doing the full rounds, before possibly getting there.

I think I might like a maid, as well as the piles of money. The flip side of this, however, is that you are reminded of what comes after the mid-1930s. They talk about the last war, but we know what is coming.