I would say that any Star Wars fan would like this book, but what do I know? I saw the first Star Wars film 41 years ago, not knowing there’d be more of them. Didn’t understand it, forgot most of what I saw, and I was an embarrassment when I was taken to see one of the more recent films a few years ago.

But yes, I think you’d like Elizabeth Wein’s Cobalt Squadron, which ‘takes place prior to – and contains characters and ships from – The Last Jedi.’ I liked it. But then I like sci-fi, and felt I didn’t need to know more than I do to read it. I trusted Elizabeth – who apparently watched The Empire Strikes Back 13 times as a teenager – to get it right.

It’s got that Carrie Fisher in it, as Leia Organa, and when looking stuff up, I see that the main character in Cobalt Squadron, Rose Tico, was also in the film, so is actually ‘real.’ I liked her. Clever and brave, and good with technical stuff. 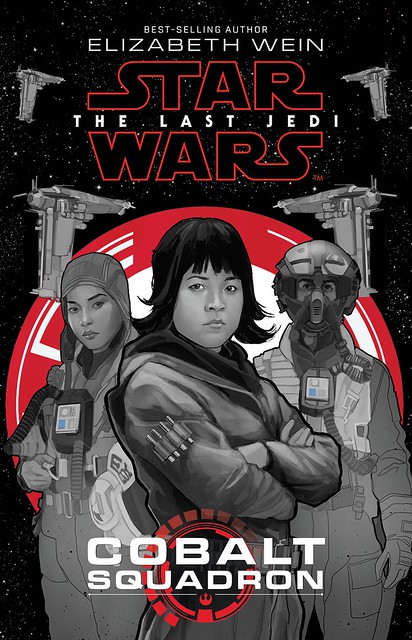 The story here is about saving Atterra Bravo from the First Order, and the rescue mission undertaken by Rose and others, with the blessing of General Organa. Having to fit in with plots before and after, there is obviously a limit to what can happen, and where, but as I said, I liked it.

It’s good when knowledgeable fans write extra stories to do with what they love so much.

And If I’d known then what I know now, maybe I’d have paid more attention back then, and not got my various robot characters mixed up. I won’t insult or upset you by showing quite what an idiot I was. Still am.