The Art of White Roses

Cuba, 1957. It’s not a time or a place we get to visit much in YA literature. In The Art of White Roses Viviana Prado-Núñez takes the reader to Marianao on the outskirts of Havana, where we meet the Santiago family, and especially 13-year-old Adela, named for her dead grandmother.

It seems no one likes Batista. Nor do they seem to be supporters of Fidel, and I suppose that’s quite normal. Most of us fall between the extremes, don’t we? 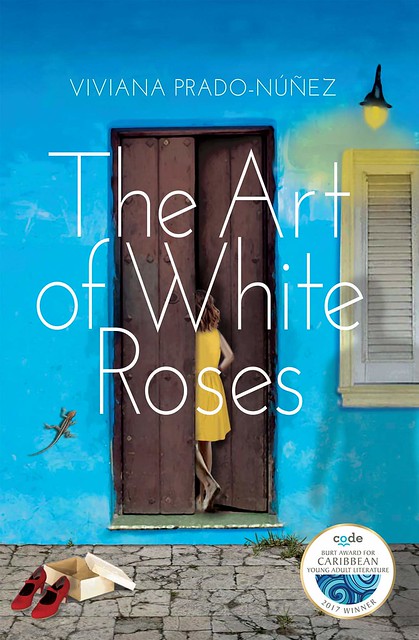 In their neighbourhood, people are disappearing and they don’t know why or what’s happened to them. Besides, people are more worried about everyday kinds of things. Adela doesn’t much like the nuns at school, and her parents are struggling, both with daily survival and with their marriage. Adela’s grandfather lives with them, spending his time watching television, occasionally uttering words of wisdom.

What with [the fear of] people being killed, and things like infidelity and rape, there is much adult content here. Adela seems to understand much of it, while her three year younger brother Pingüino for all his flamboyant naughtiness, does not.

This is less about the Cuban revolution and more a novel of growing up and making sense of the normal world. The explosions and the killings are mostly a backdrop.

Viviana freely admits in her author’s notes that she doesn’t know what Cuba was like back then. That’s all right. I still felt transported to a new and interesting place, full of life and smells and colours. She wrote this book as a teenager, and this mostly shows in a certain lack of guesswork as to what wasn’t really very common in 1957, anywhere. It’s a bit like unthinking mobile phones and knowing you have to work out what you’d have done without them.

Those are just details, and this story is a wonderful description of life as most of us haven’t known it, except in the way all lives are quite similar, in some way.

There is much, well, relatively much, Spanish in the book. I don’t know to what extent that might make it harder for a non-Spanish speaker to read. For me it added more, nice flavour. By not translating it all, Viviana at least doesn’t talk down to her readers.