Trailers, eh? I’ve been fooled once or twice in recent memory. Not that I go to the cinema all that often, but I did catch a couple of trailers for The Bookshop, liked them and thought I’d go and see the film when it came.

I’m almost certain it never came. Not here. And that’s interesting in itself. Why ‘trail’ a product you won’t be selling?

When Daughter was last here she assisted the old folk – that’s us, the Resident IT Consultant and me – by compiling a Netflix list of films, making them easier for us to find. And urged by positive noises on social media, we watched The Bookshop a few days ago. 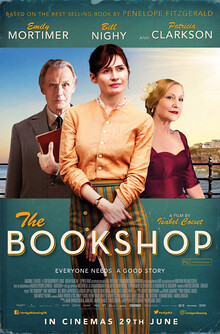 It had Bill Nighy in it. Not many films don’t, these days. I like Bill. He was good in this one, as well, even if he only ever has the ‘Bill Nighy’ setting. His face after reading Fahrenheit 451..!

The thing is, while it was a pretty decent film, it was nothing like the trailer had led me to expect. I don’t know the book by Penelope Fitzgerald, on which it was based. On the one hand it was another of the popular retro settings, travelling back to the 1950s, and a seaside bookshop being set up by book-loving widow is quite an attractive idea.

On the other hand, there was much nasty behaviour by her neighbours – made worse by today being 2019 – and she was far too kind and polite, as well as perhaps a little naïve. Her helper, played by Honor Kneafsey, was refreshingly observant and outspoken for someone so young.

And being me, I couldn’t help but pick holes in the authenticity of the retro-ness. But apart from expecting a different film, it was good. Not cheerful, so much.

2 responses to “The Bookshop”