I seem to have chosen the way of the witches in the Discworld books as I work through them. Although that sounds like more of a hardship than this could ever be. I just feel I want to learn more about these esteemed ladies, Granny and Nanny. 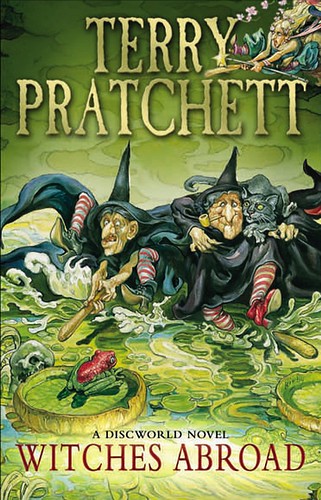 The first time I met Nanny Ogg – and I do not remember in which book – I had a different view of her; thinner, sharper, wiser. Not that she isn’t wise, or a little sharp, while being soft. Thin, not so much. That’s for Granny Weatherwax to be.

Going abroad is never easy, but I’m glad I don’t sit for that long on my broom, and I reckon their idea of some sort of broomline with food served is bound to catch on, especially if the seats aren’t too narrow.

In Witches Abroad Terry Pratchett manages to cover a large number of well known stories, all the way to Emberella herself in Genua, where servant girls have to marry the prince.

In fact, I believe what I liked here was that there were so many female characters, and they were strong, even if they used their abilities to do ‘wrong’ and the more I think about it, there weren’t many men at all, other than weak ones or drunk ones. Even dead ones.

As for the wrongly spelled Magrat and her wrong spell pumpkins, she will be all right. She even stood up to Granny. And who on earth knows when to stop when spelling banananana?

But if you want some of Terry’s clever observations as quotes, then you can read the book yourselves.