Actually, any colour marzipan would do. I’m not fussy. Even black. Black cake would taste as cake-y as any other, wouldn’t it?

It’s odd how Swedes – almost to a [wo]man – turn to garishly coloured marzipan-covered cake when there is something to celebrate. There are plenty of different cakes, mostly all very yummy. But when it comes down to it, it’s the marzipan we go for. Generally green, but pink for Valentine’s, orange at Halloween, white for end of school celebrations, yellow at Easter. 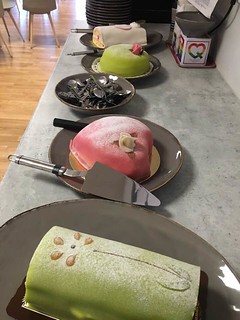 The Swedish Gender Equality Agency, headed by Lena Ag who’s an old acquaintance of mine, was set up a year ago and was then supposed to be scrapped during the recent period when the country was without a government. Luckily someone saw sense and they are now continuing in business. But the thing is, there was cake to celebrate the future. (I borrowed Lena’s photo of their selection of cakes. All in colourful marzipan.)

Equality is great, but I’m afraid I was more taken with the cakes…

And jealous. Bookwitch is twelve today and would love to encounter even one of those cakes on her kitchen worktop.

I mentioned black marzipan. The Bookwitch dining room is finally turning completely white after two years of being the wrong colour. So I’ll celebrate by enjoying this whiteness instead.

And there isn’t anything fundamentally wrong with jam on wholemeal toast.

2 responses to “We are twelve”