Mortimer and the Sword Excalibur 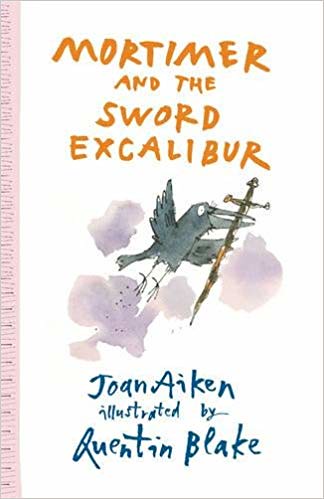 I’ve come to the end of Joan Aiken’s short books about Mortimer, the slightly naughty raven, and his Arabel Jones. As I have probably said before, these books are a lovely piece of time travel, back to that underestimated period that was the 1970s. It shows that anything you write about ‘now’ will one day mean travelling back in history, if you are only truthful enough about what it’s like now.

I suppose the title gives it away somewhat, but this is a story with an Arthurian flavour. Mortimer shows an unsuitable amount of enthusiasm for the neighbour’s lawnmower, and that is pretty much it. I can see where Arabel’s mother, Mrs Jones, gets annoyed with the family’s pet raven.

Arabel herself is being ‘threatened’ with a new dress. Pink. What’s so fascinating about that is that this is how it was; the making your own clothes, and how you made them, showing Joan Aiken knew a bit about dressmaking, which is now rather a lost art.

As for that sword, well…