Iceland noir, with some colour

To get in the mood for Iceland I reread Ævar Þór Benediktsson’s short story about the librarian who finds her library empty of books one morning. And who then drops her Moomin mug.

No, I didn’t go to Iceland. Daughter did. (It was ‘on her way’ back from Baltimore…) And no, there has been no dropping of Moomin mugs at all. But I gather Reykjavik had all sorts of lovely things a person could buy. Including a shop window full of every colour Kånken backpack. (She gave me one for Christmas, so no need to shop for more. The backpack; not the shop window.) 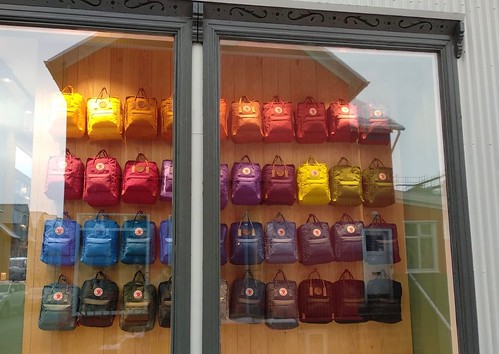 She did go to the library, though. They had an exhibition of photographs on, which to her surprise they charged for. Must be in case more Moomin mugs drop. She got her zeroes a bit wrong, too, having recently exposed herself to the Chilean peso, where it was quite reasonable to pay 15,000 for lunch. (I think, anyway.) 1000 krona in the library, however, was more than expected.

The day after Daughter’s arrival in Reykjavik, I noticed BBC Four had the new season of Icelandic noir Trapped on. I wasn’t entirely sure it was wise to watch the horrendous things that might happen in Iceland, but we did anyway. Seems the Resident IT Consultant had watched season one, while I hadn’t. I’d forgotten this.

It’s grim. I suppose if the weather was sunny, the noir would kind of fail, so maybe the grey drizzly surroundings are to be expected. I find the people – the fictional characters – unlikeable. I went to school with that girl. Didn’t like her then. Don’t like her now. The men are all the same as those who sit on Swedish park benches with a carrier bag next to them. And don’t drink the water in the stream, whatever you do!

The lit up town at night is pretty, though. And I almost understand some of what they say.