‘One of the best jobs in the world’ 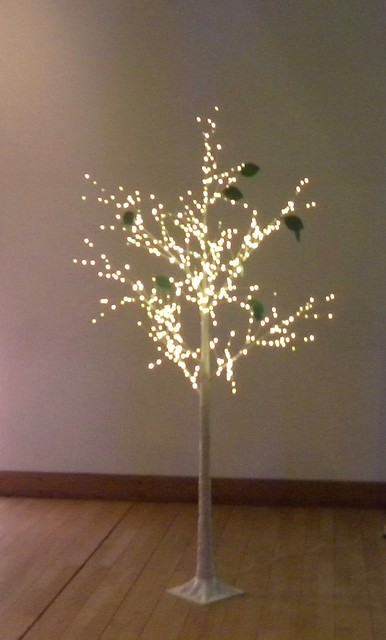 That could describe my ‘job,’ but in this case it’s what Deena Wren who has just been awarded the 2019 Scottish Book Trust Learning Professional Award, said at the Lighthouse in Glasgow last night. I think I’d like to be a pupil at Beeslack Community High School, if I could have her as my school librarian. Take everything good that could possibly be said about a librarian, and that’s what everyone at the school did say as they were interviewed for the video we were shown at the award ceremony. 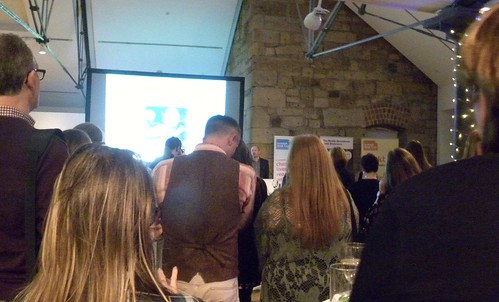 Last night was an award-studded event where the winners of the 2019 Bookbug Picture Book Prize, Alan Windram and illustrator Chloe Holwill-Hunter were presented with their prize money for One Button Benny. Following last week’s announcement, John Young was there to receive the Scottish Teenage Book Prize, and Kerr Thomson, one of the runners-up was also present. 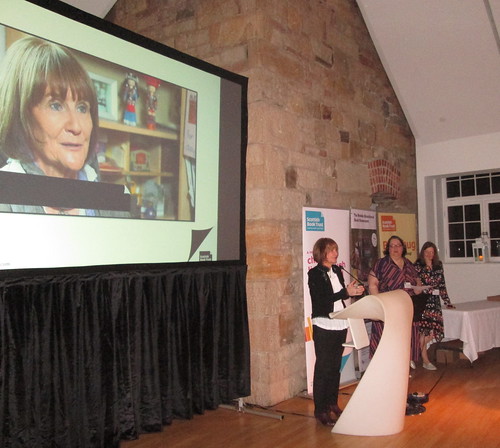 And after all that it was time for the Outstanding Achievement Award to be given to Theresa Breslin for her thirty-year-long career as an advocate for children’s literacy and libraries. I know how hard Theresa has worked, and she’s also written ‘a few’ books. About fifty. Ever modest, Theresa praised Deena Wren for her excellent work, telling us what it had been like when she did an author visit at her school. (Something about sandwiches, I believe.)

The Lighthouse was full of teachers and librarians out in force to celebrate their own, and – I’m guessing – to have a nice night out. There was wine, and the thing to eat right now seems to be deep fried cauliflower, with some sort of dribbled chilli icing. I might have eaten quite a few of those. 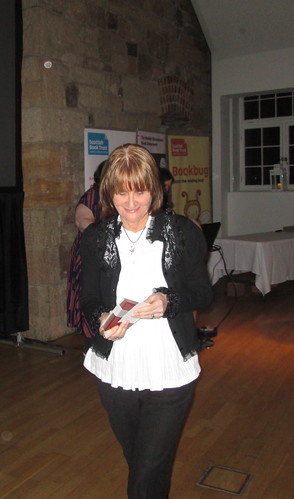 As usual I encountered Mr B, Theresa’s ‘stalwart husband,’ along with a Theresa ‘twin’ who turned out to be her sister, and I’m just not saying anything about how old anyone is. There were daughters, and at least one niece, and possibly friends and neighbours. The award was embargoed, so it had been awkward inviting people along without saying what to. Theresa herself came and sat with us, for at least a minute, before she was called upon to get up and talk to people.

I’m glad Mr B was there with his camera, as mine really didn’t enjoy the dark, or the fact that I am short and couldn’t reach far. One junior Breslin even climbed up on a chair. 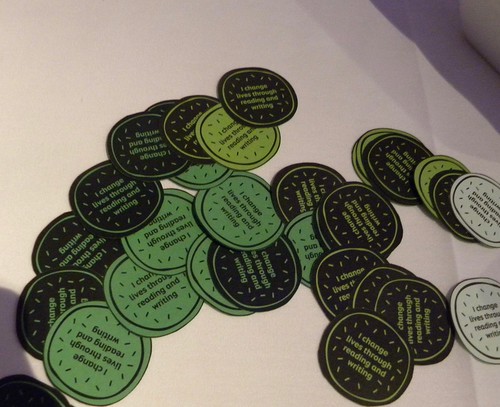 As I took a few turns round the place – which unlike me is quite tall and narrow, and might explain the name Lighthouse – I encountered Barbara Henderson, down from Inverness. It seems that we both sort of invited ourselves… Barbara introduced me to Kerr Thomson, and also to Lindsay Littleson whom I’d not met before. The conversation then strayed to unicorns. 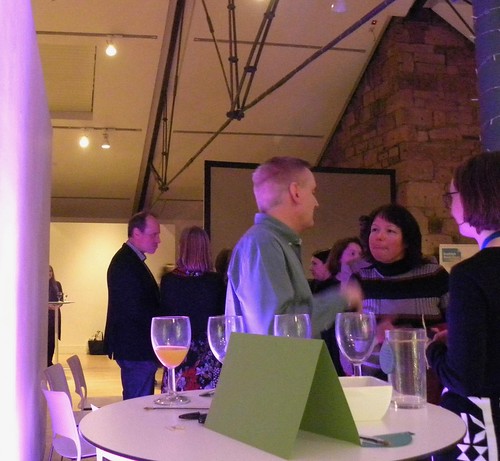 It was the kind of evening when you remember why you read and why it’s something most of us need. Reading makes us feel better. And your reading can improve if you have access to good librarians with a passion for books.

(Photos of Theresa by Tom Breslin)

3 responses to “‘One of the best jobs in the world’”