Hindsight often makes me worry I shouldn’t have done that, whatever it was. Like two years ago, when instead of reviewing some suitably woman-ish books on International Women’s Day, I rambled on about Mother-of-witch. But with more hindsight, and a rereading, I came to the conclusion it was OK. As for her, she was more than OK.

Another two years earlier I wrote about her mother, my grandmother, whom I never met. It was the fact that she embroidered five identical stars for Christmas one year. I realise they probably made for fairly affordable Christmas gifts, but it’s still a lot of work, alongside all the day-to-day stuff women do. Mothers. She had five children, this grandmother I never knew.

While we’re on the subject of sewing, her second daughter, my Aunt Motta, was a pro, by which I mean she made a living sewing. And when she didn’t make her living by it, she sewed for the rest of us, plus a little hobby sewing, like the cushion you see here. It was made from the cut-off corners of the lace that edged 18 table cloths. Obvious, when you think about it. 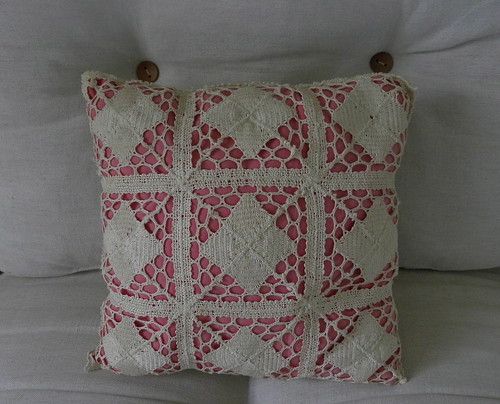 They could all sew. Well, perhaps not Uncle. But then not every uncle wore two red paper napkins tied round his waist (and nothing else). Careful what you get up to, as impressionable 9-year-olds remember the most astonishing things.

The eldest child, another girl, my Favourite Aunt, was very intelligent and very capable. She left school at fourteen and started working in her home town’s textile industry. By the time I knew her she was 47 and worked for the textile union, where she ‘looked after the money,’ and rubbed shoulders with future Prime Ministers and other bigwigs in the leading political party. What might have become of her if she’d been able to continue at school?

The baby aunt quite possibly didn’t sew so much, but she certainly knitted, and brought up three cousins for me, and worked nights so she wouldn’t need a babysitter. And when Mother-of-witch needed childcare, she was there. She helped admit half the town’s teenagers to see films at the cinema where she worked, recognising friends of friends. Plus there were all the discounted coats I wore as a child and in my teens.

The thing about these four sisters is that had they got more of an education, they’d definitely have gone further. Not that there was ever anything wrong with where they did end up. We need people who make winter overalls for their nieces – especially if purple – and who has connections in the world of film, or who helps you wee by the side of the road. This kind of assistance should not be underestimated.

This entry was posted in Blogs, Education, Film, History. Bookmark the permalink.