‘Do they know it’s not August?’ both Offspring asked. They did. They being the Edinburgh International Book Festival. And bless them for having an extra event for us, in the dreary days of March, when it was so cold that I suspect Angie Thomas, whose event this was, wanted nothing more than to get back to Mississippi. ‘I can’t do cold weather,’ she said. Although it appears Scottish shortbread goes some way to pacify her. 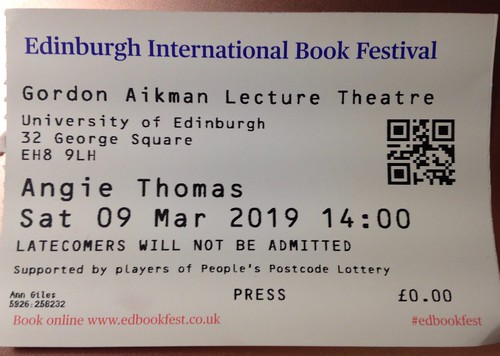 This event, where Angie spoke to poet Nadine Aisha Jassat, was very popular. People queued outside the Gordon Aikman lecture theatre in George Square before being let in. It was a predominantly female audience, mostly young ones, but a fair few unaccompanied adults too. This is testament to how well known this new American author has become, and how popular she is. I’m guessing most had read both her books, The Hate U Give and On the Come Up.

As one [black] fan in the audience pointed out, Edinburgh is not a very black city, or I’m sure there would have been a much larger proportion of black readers present. Angie’s books must be what they have all been waiting for. I would have, if only I’d known.

On this, her only Scottish gig, Angie said you should do what you’re scared of. She’s surprised that she’s now making a living lying, which she’d not been expecting when working as a church secretary in Mississippi, occasionally writing her novel at work. Like her two heroines, Starr and Bri, she grew up in a poor black area, going to a white school, having to live two different lives.

‘I respond to things’ is how she describes herself. She changed after a shooting of a young man in California, where everyone concentrated on the fact that he was an ex-con, rather than on the fact that he was lying on the ground and was shot in the back. So Angie wrote The Hate U Give to prevent herself from burning down her school in anger. And On the Come Up was written in response to that book.

Writing is cathartic, and she has inspired young people to write, which has empowered her. For many of them it has been a revelation to read a novel where ‘they talk like I talk, they sound like me.’ Angie pointed out that although her speech may sound simple, using words like ain’t, she has a GPA of just below 4, which is very high.

Angie wants people to remember that Trayvon Martin was a boy whose mother loved him. She also said that contrary to popular belief that black fathers are not part of their children’s lives, there are statistics that prove they are more than average involved. For Angie it’s important to concentrate on the people, not on the issues.

And with that it was time for questions, and we were all very taken with the flying mic. It’s a soft – red – cube, that was chucked round the auditorium. It was hard not to hold your breath as you watched to see where it would land, and if its intended target was going to miss. First one out was someone I know, and it was one of many really good questions. 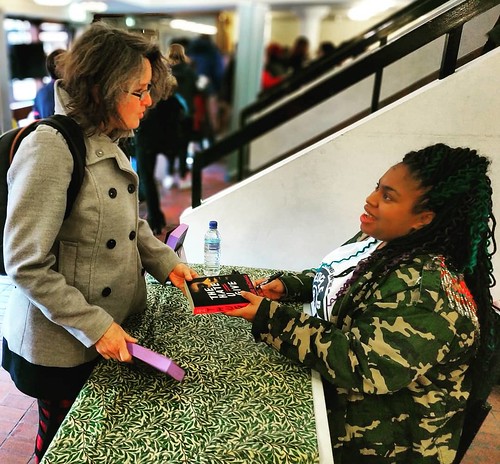 Angie feels that white Americans have stolen from the country by celebrating people like Dr [Martin Luther] King only after their deaths, especially when they were responsible for him dying. But she’s hopeful, feeling that the young of today are much more aware of issues. ‘The work has to start now.’

She has always made up stories, beginning by rewriting Green Eggs and Ham because she didn’t like the ending. At the age of eight she entertained her friends at school with cliffhangers. Her books need both the trauma and the triumph, which answered a question I’d had too. Subjects like fatal shootings don’t generally have much good about them, but Angie has inserted hope into her stories.

She loved Harry Potter. Those books ‘saved my life!’ And we could see that in The Hate U Give; it’s almost incongruous to have the famous wizard in a story about crime against black people in America. But it gives it recognisable reality (I know. They are books about magic), something nearly all of us know.

On the Come Up features hiphop, which when it’s good Angie describes as poetry. Luckily someone asked her to rap, which she did, long and well, to jubilant applause. (The sign interpreter in Newcastle the day before had had to give up halfway…)

Asked about her books being banned, Angie said that ‘the banned book list is a great list’ to be on. Americans always want to read more of banned books.

At first Angie hadn’t been sure it was OK to write the way she did, so she asked an agent on Twitter, which is how she got herself an agent, and how her debut novel had 13 US publishers fighting to get it. Another five in the UK. Her very sensible editor tells her that she needn’t worry about how she writes; she should stick to being authentic, and if white readers don’t get it, they can Google. There are apparently a number of in-jokes in both books… 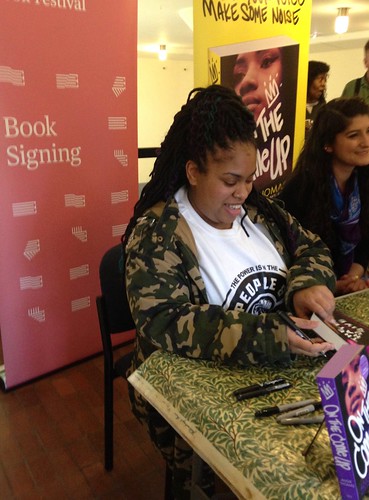 We could easily have done another hour. As it was, Angie had a plane to catch, but there was time for some signing downstairs. At first I wondered why so many fans went to the toilet instead, until I realised the signing queue went down to that level and then round and up the other stairs, and initially back outside as well.

I chatted briefly to a friend before going in search of Dodo and Son for some tea. When we’d failed to get into our first two choices of café, and walked back behind the lecture theatre, the queue was still going strong. 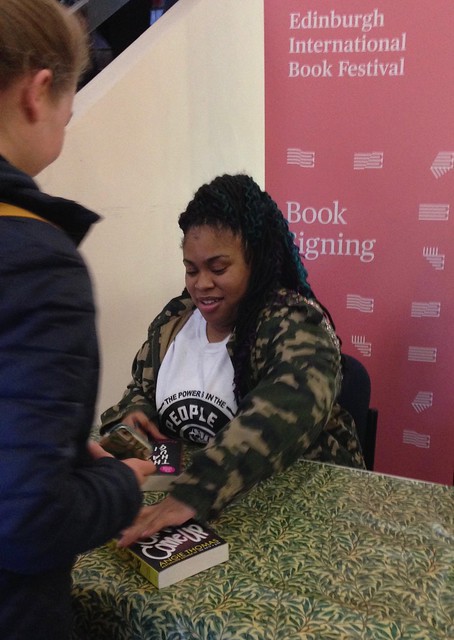 I’d say that was one successful event. Even if it was in March.