The Resident IT Consultant went to Tobermory the other week. ScotRail was offering a deal – for ‘old’ people – of a return anywhere in Scotland for £17, I think it was. To be fair, he struggled a bit. Many destinations can be reached for less, anyway. At least if you are old. And some trips he’d already done.

So, Tobermory it was. He started early and returned late, and managed something like two actual hours in Tobermory. Trains, ferries and buses took most of his time.

I meant to tell him (=suggest) to go to the bookshop, but I forgot. And then I wasn’t awake when he left.

But it seems a Resident IT Consultant can be trusted to find, and visit, bookshops anywhere. Not surprising really.

Halfway through the day a photo arrived by email, showing me the interior of the bookshop and a table laden with Debi Gliori’s Tobermory Cat books, and a ‘cat’ and lots of other great books to do with Tobermory, and Scotland. 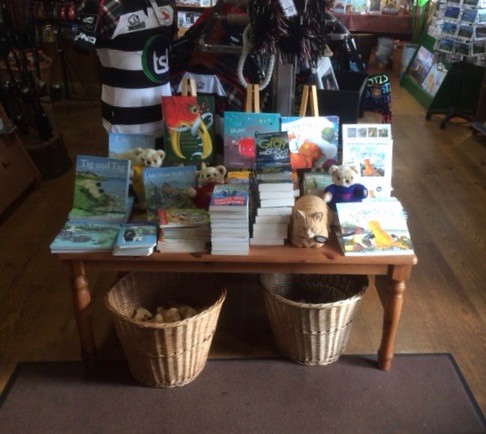 I was also out and about, at the other end of Scotland, and isn’t it amazing how two old people can share photos across the country like that?

And yes, he did buy a book.

2 responses to “To Tobermory”