This newly translated fairy tale by Hungarian Ervin Lázár didn’t, in all honesty, attract me with its title (the princess sounded more like a homeopathic remedy) nor with the illustrations (which grew on me rather when I read the book), but that brief dip into the text that I like to do, made it look both fun and intelligent. And that’s how it turned out to be. 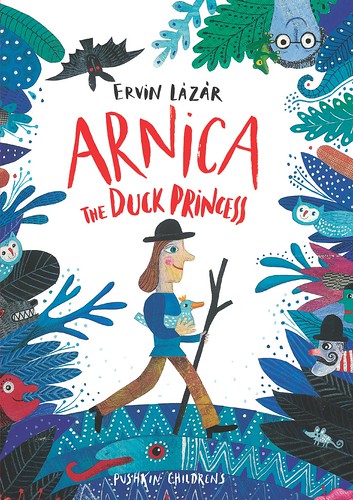 The style of writing is refreshingly modern and amusing, and the plot does have a poor young man for the Princess Arnica, but there are no three* brothers, nor any stupid or unkind parents. The King is lovely, in fact. Very sensible and kind and fair. Arnica herself is apparently not all that beautiful, or at least not until Poor Johnny, as the hero is called, sees her and falls instantly in love, and that makes her beautiful. Poor Johnny is poor, but the King does not mind this.

All would be just great were it not for the wicked Witch,** who casts a spell making the young couple into ducks. But being so very much in love, they decide to take turns being a duck.

And eventually, after many charmingly different little adventures, the two leave their duck-ness behind and everyone lives happily ever after.

What’s so attractive, apart from the fun story, is the language. I have no way of knowing if this is the style of Ervin Lázár, capably translated by Anna Bentley, or if there is some magic happening in the translation. There is an unusual plot device in that in every chapter the author appears to be chatting to a child about how to proceed and what certain things mean, sometimes having new ideas or names introduced into the story, the way a child might come up with odd little things. It’s really very charming.

And as I said, the illustrations by Jacqueline Molnár turn out to be exactly what the book needs.

*You do get twelve of them at one point…