‘You’re so sensible,’ laughed my aunt, at my sensible-ness, many years ago. She was right, and she didn’t mean it as a compliment. It was kind of interesting, I thought, because I’d never considered my cautious ways to be sensible, exactly. And the aunt was an in-law, which presumably is why she could see this, where the blood aunts would never have stopped to analyse my behaviour.

I’m still so cautiously sensible, almost all the time, but as an adult I at least understand where I’m coming from. I’m me.

So when characters in novels do really stupid things I want to scream. I have learned that they must do it, or there would be nothing a bit bad to sort of ‘come back’ from in the plot. Even I recognise that if all fictional characters went round behaving like me, there’d not be much of a story.

I’ve pondered whether these characters are meant to be like their readers – unless that reader is me. But more recently I developed a new theory. Even quite impulsive and daring readers might be meant to see how reckless the character is being. And then we can explore together how they can be seen to discover this and how things are – mostly – sorted out.

At the weekend I marvelled at the sheer stupidity of the teen girl in Icelandic Trapped on television. Putting herself in such danger when the corpses are piling up, and to agree to meet ‘the bad guy’ in the cemetery… I mean, really!

I’ve been reading a book where the heroine seems even more stupid than normal, to the extent that the main adult character questions her behaviour, when she seems unable to accept advice or to even listen to immediate orders to be quiet, or not to move, move faster, or whatever, just to stay alive and not endanger the others.

But I’m sure things will be fine.

Teri Terry writes great YA fiction. It’s dystopia at its best; very moreish and as entertaining as a look at a possible bad future can be. This needs to be said. I enjoyed reading her Slated trilogy a few years ago. Yes, it was bad. But it was in the future, and it seemed to be fairly far removed from anything we know now.

Now though, with her prequel Fated, I am in a state of shock and as fearful as I’ve ever been from reading dystopic fiction. The action has moved to today, and it is far too easily recognisable a world. Most of Fated [probably] takes place in 2024, but with some of the important changes in that world having happened in [I think] 2018. 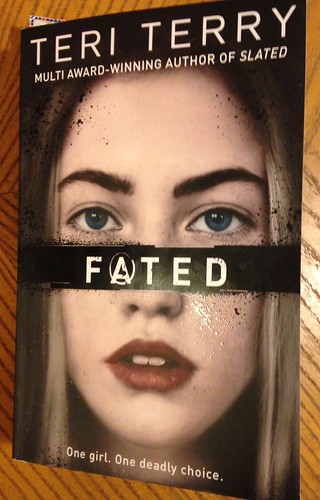 This is nowhere as easy to read about as the future in 2054. It is too close to home.

Or is it home? Britain has left the EU and closed its borders to Europe. It has told its foreign residents to leave, or to stay and have virtually no rights. People are starving. The country has a female Prime Minister, running the country with the support of another political party, which seems to have given up on its principles.

Does anything here sound familiar?

Not having so many foreigners to blame for terrorism, they are pointing the finger at children. They come up with the most dreadful policies to ‘save’ the country.

Fated shows clearly how a terrorist is made. You’re not born bad; you are pushed into bad behaviour, or seemingly bad behaviour, by the government and the police. The ‘slating’ that happened in the trilogy was bad. But it’s nothing compared to what went before it, now that we know the background.

The two main characters are 16-year-old Sam, daughter of the Deputy PM, and Ava, the intelligent but poor 17-year-old daughter of a former academic – now a taxi driver – and his Swedish wife. A wife who left the country when it closed its borders.

Can you see where I’m going with this?

On Teri’s request some time last year, I provided her with a Swedish lullaby, an endearment and my opinion on Swedish health care. I’d almost forgotten about it, but thought I could always make some lighthearted comment about it here.

I don’t think I can.

What if I’m Ava’s mother?

If you think you know how far an author can go in a non-adult novel; think again. Admittedly, a prequel to a dystopian trilogy can’t be all sunshine and roses, but this is far worse than you imagined.

But as I said, it’s a real page-turner and very well written and plotted.