When I remembered I had a few unread novels by Carl Hiaasen, I knew I had to pick one of them to come with me on my recent travels. I knew it’d be good, and unlike children’s books that can be too short, Double Whammy is just over 400 pages so I could be sure it would last a while.

I might have chosen Double Whammy anyway, for being the first of the Hiaasens on my shelf, but having looked through all the books, I couldn’t help noticing this one had Skink in it, and that rather clinched the deal. I like Skink. Well, within reason, and it is easier to like him in a book than it might be in real life. If he was real. 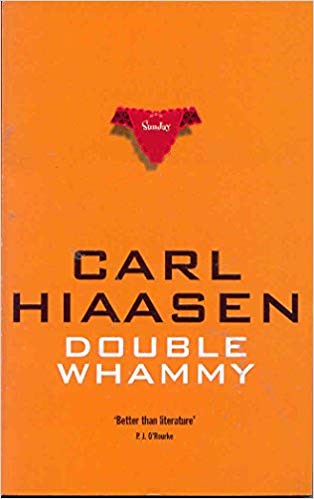 Double Whammy turned out to be the first Skink novel, so that was an added bonus. (If you don’t know Skink, you can read about him here.) He used to be that totally unlikely creature; a Florida Governor who was honest and decent and couldn’t be bribed. So that’s obviously fiction.

Double Whammy is about the fishy stuff that goes on in the world of bass fishing in Florida. If you think it’s weird that men sit for hours in silence, fishing, it’s even weirder that people will watch these men fishing on television, but there you have it. And if you read Double Whammy you are reading about people watching people fishing…

Some fishermen are cheating, because there is much money at stake in bass fishing competitions. And then they start dying, and someone needs to find out about both the cheating and the murders. Private Eye R J Decker gets the job, and he soon teams up with Skink, despite being slightly scared of this wild man who lives off roadkill.

It’s funny. It’s quite disgusting at times. But it’s also reassuring to read about people who want to do the right thing, both for the environment and against cheating. And say what you want about Carl Hiaasen’s usually very attractive and often scantily clad women characters, but they are feisty and brave.

And all this without any mobile phones or decent clothes, since this was 1987. It’s amazing how far we haven’t come in some respects.

(It’s probably for the best if you are not a dog lover.)