Ten – or a hundred – years on and it’s not as if the world has suddenly got a lot better. On Saturday it was 100 years since the massacre at Amritsar. Ten years ago I read Bali Rai’s historical novel City of Ghosts and was shocked. Because I didn’t know nearly enough about this. I blame my non-UK background, but of course, lots of people here don’t know much either. There was an interesting piece in the Guardian the other day. Seemingly British people don’t realise that what happened that day in 1919 didn’t endear them to the Indian population. Or that they haven’t forgotten. 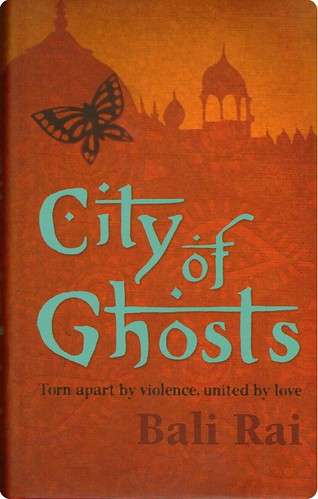 Did you know about all the Indian soldiers fighting for England in World War I? I didn’t, other than knowing that soldiers did come from other countries to fight. The sheer number is horrifying. It’s one thing – just about – to send ‘your own’ to die for your country. To send Indian soldiers to their deaths because you have a quarrel with your German neighbour is awful beyond belief.

This novel has a number of sub-plots, which together build a picture of India in the years before 1920. There is Bissen, the soldier who fought in France. There are Gurdial and Jeevan, two teenagers from the local orphanage in Amritsar.

We learn of what happened to Bissen in Europe, and how it affects his life in India after the war. He is an older and wiser influence on the two boys. Gurdial is in love, and Jeevan picks the wrong friends.

And then we have the time and place; Amritsar in 1919. You can tell it’s not all going to end well.

Bali has written a very Indian story from almost a century ago. You can smell the place, and you can see all the colours. You can taste the food, and you can almost feel what happened on that fateful day in April in Amritsar. There is a ghostly element, which although impossible to explain, fits in perfectly with the plot.

It’s a story that needed telling.

It’s a story you need to read.