By the third evening I wanted to be home, alone. But instead I sat down on the suitcase-unpacking surface in the hotel room and stared into space. It sort of worked.

Ten years on from this event, we were back in Oxford. And isn’t it amazing how similar we all are? OK, the people from Bangalore have bougainvillea in their garden. I do not, but wish I did. And it sounds like the Indian ID [card] system is far superior to the Swedish one.

It was also very English – and in this instance I don’t mean British – with college gardens, afternoon tea and chats about Roedean. The trees blossomed by the side of the streets and it was all I could do to not move to Oxford there and then.

Because it was ten years since the last celebration, our hosts – yet again – offered us a Ceilidh, although it was more English dancing than Scottish, and everyone made fools of themselves, except for me and Aunt Scarborough (because we sat it out). Only one guest needed to join in via Skype, from the top of some volcano, the other side of the world. 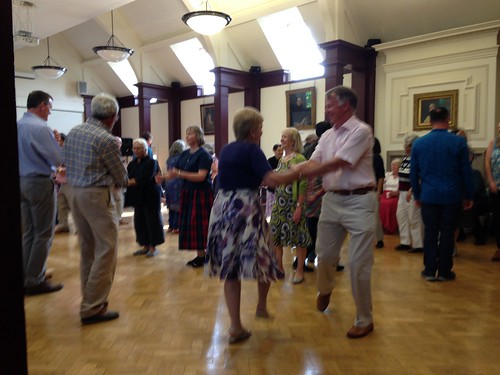 It was, as many of you will know, unseasonably warm. This was due mostly to the fact that I had brought my padded jacket, the same one I’ve worn all winter. I know that such a hot Easter is a bad sign, but it was actually quite nice, except for those who turned over-pink in the process.

But oh, the luxury of sitting outside like that, and the balmy evenings!

The day before, the Resident IT Consultant and Daughter accompanied me to, lightly, grill Linda Sargent and Mr ‘Sargent’ over Easter Sunday lunch. Well, roof terrace type of places are likely to do that. We had such a good time and sat for so long, that we had to be asked to leave as they were closing. But not before we had moved tables to achieve more shade.

Also discovered a place that serves enormous Kransekager, so I will just have to return. Or move to Oxford.

If all this sounds nice, let me tell you how nice it is to be home. Alone.