Total Recall is one of my Sara Paretsky gold nuggets; picked up second hand and kept until such a time as I needed more Warshawski to read. This last week was it, and I was struck by how Sara introduced her story with a mention of Oxford (just as I was leaving that place) and the Resident IT Consultant’s old college. 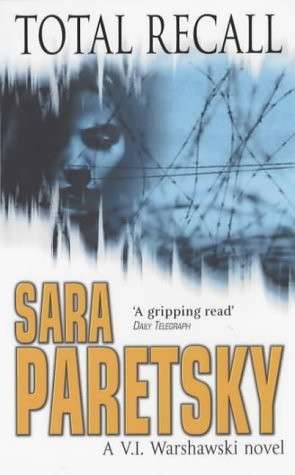 The book is almost twenty years old, and deals with two things. First the crime, which is insurance crime in Chicago, and I couldn’t help noticing how it pre-dates the things we are so concerned with today. You can put a few bad guys in prison, if they survive their brush with V I, but they don’t run either the local police department, or the country. People’s lives are in jeopardy, and their money, but there is less of the wholesale fear for your existence that we see today. And mobile phones were not what they are now.

So I enjoyed the crime, if one can say that. It seems that lightning can strike in the same place twice.

The second topic of the book, which underlies all that happens, has to do with Lotty Herschel’s past in Vienna and her time in London after being evacuated. Anything that goes back to the Holocaust is harrowing, but in some way I see Lotty’s current suffering as being more that of anyone looking back to a point in their childhood and youth. It’s the child’s fears, and the lack of control you had as a young person when things happen.

Partly told in Lotty’s own words, we learn many new facts about her and Max, and others previously mentioned in these books. (This makes me wonder how it works when an author starts writing. Sara couldn’t have known everything about the characters she put in the first story. And as the author makes new facts, and then more new facts, it’s fascinating how it all fits in, and makes that person more of who she or he is.)

There are many wise words and sentiments about loss and death and guilt and all those bad things we sometimes believe in. I hope Sara can remember them for herself, but then we are always our own worst enemy, as proven by Lotty in this book.