I had such a lot of fun with Caroline Lawrence’s Time Travel Diaries that I kept returning to the book until I found out what happened and how it ended. Which I’m obviously not going to tell you about. 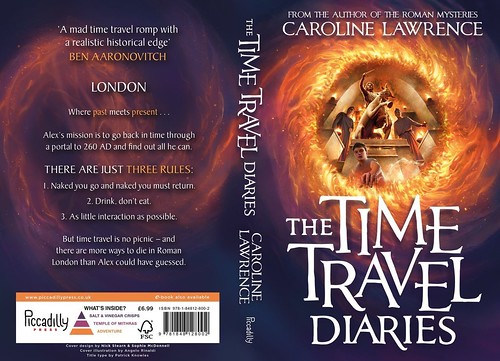 And it’s not Caroline who’s time travelling, but her new main character Alex. At least to begin with, I felt he spoke rather like a hardboiled private eye, albeit as a Y8 London school boy who is a bit of a wimp.

What helps is that he speaks [modern] Greek because of his gran, with whom he lives, and Latin because of school. So he’s quite handy to have around if you suddenly encounter people from the olden days. In this case, Roman London.

Yep, Caroline hasn’t exhausted her knowledge of those days yet, and there is plenty to learn about old London. Or is there?

I can’t really tell you how or why Alex suddenly goes back in time, nor what happens when he does. But it’s fun. And you know things won’t go entirely to plan, because what would be the point of that?

Speaking for myself, I like seeing what it was like a long time ago, in places that I know today. Especially as I am not expecting to actually end up there, with their bad teeth and plagues and stuff.

It’s a bit of a mystery, and although you might feel for technical reasons that this time travel lark isn’t something to be repeated, even if Alex were to survive, it does seem as if this isn’t the last we’ve heard of him.