We should at least be safe from sequels. The fact that Lindsay Littleson’s crime novel is set on the Titanic sort of rules that out. The days are limited as it is, with three child passengers on this famous ship finding mysteries and setting out to solve them, unaware that time is even shorter than the official expected arrival in America. 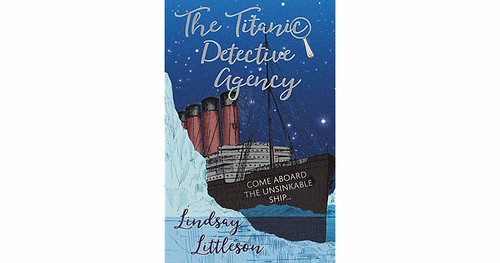 As one of the few people on earth who have not seen the film, it was interesting to learn about travelling on the Titanic; the different passenger classes, for instance. And interestingly, Lindsay didn’t make up her characters. They are real passengers (and the fact that they were, does in no way guarantee that they survive), and this makes everything more realistic.

Like Johan from Knäred. I was gratified to find someone who could have been practically a neighbour, on the Titanic. Johan was poor, so travelled in third class, on his way to join his father and older sister, having left his mother and younger siblings behind in southern Sweden. He speaks no foreign languages, but still manages to befriend Bertha from Aberdeen and her young friend Madge.

It’s not the mysteries that matter; it’s the Titanic and the lives described. You meet people and even though you know what will happen, you have no way of knowing who will die and who survives, or what will become of the survivors, for that matter.

Learning about a catastrophe in this way brings home the awfulness of both the voyage, but also of how people lived and why they travelled and what they were hoping for, or fearing, in America.