I wonder. Is there such a thing as seaside steampunk? And if so, is Thomas Taylor’s Malamander it? I loved this book, and kept wanting to put a period to it. Feels old, but can’t be; is old-fashioned in style (as in 12-year-olds should be at school and not working in hotels) so would have to be a parallel universe.

Though none of this matters. It’s simply a story and it is good. Set in a not-Hastings called Eerie-on-Sea, it is so very sea-ish. I immediately wanted to go there and stay in a big, old and probably draughty hotel, right there, on the seafront in some British seaside town of yesteryear. It’s awfully atmospheric, even without the malamander, which is a kind of large fish monster with really sharp teeth.

Also, it doesn’t exist, does it? It’s in your imagination. 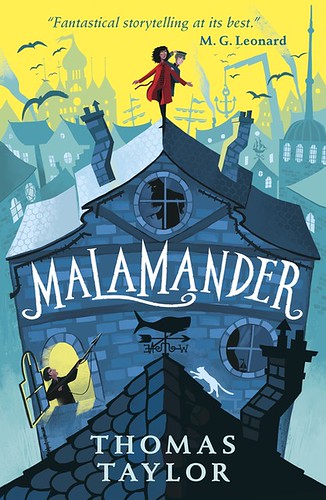 Young Herbie Lemon works in the Grand Nautilus Hotel as a Lost-and-Founder, which means he looks after everything left behind in the hotel. Or he did until the night a girl jumps in through his window needing to hide.

The two of them have a number of interesting as well as potentially dangerous adventures as they roam Eerie, looking for Violet’s parents. Or the malamander? Or trying to avoid who [what?] was chasing Violet.

Eerie-on-Sea is cold and wet, populated by some real characters. Who is good? And who is bad? Is the malamander coming for them? What about his egg?

This is a story that is just the right amount of menacing and comforting. Monster teeth, or hot chocolate.