Not long ago I mentioned choosing books to take on trips. How I want to ‘know’ that they won’t be duds, and how I need at least one spare, just in case. I usually look really carefully at books that seem OK from the press release, and more so if I’m going to pick them for my travels. But I must have slipped up a little.

This book was on my to-be-read shelf, but it seems I didn’t examine either press release or book as carefully as I should have. My fault. But at least we didn’t go away together.

Not until I received another email from the publisher did I smell rat. I went back to the original email. Yes, I suppose there was a hint. And then I got the book out and had that little look I’d obviously not had before.

THEY HAVE ONLY GONE AND CUT OUT THE LAST CHAPTER(S)! I’d say with scissors.

The clue was that anyone who felt they needed to know more could contact the publicist for information about the ending. Just as well I wasn’t making this discovery on a plane or an exotic beach, with no end in sight.

To my mind, this mutilation of a book is So Very Wrong.

Any good vibes I might have harboured would have disappeared when finding this end-less end. No information sent over later would remove that feeling.

It’s not exactly a new Harry Potter. And had it been, then an embargo until publication day would have sufficed. It’s a debut, and I fail to see why a ruined paperback would thrill the reviewers. There is only one place for it to go, and that is the [landfill] bin. 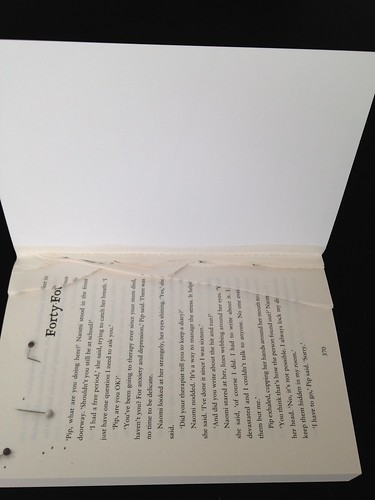