There’s nothing like a little push to get going. So after years of intending to read James Oswald’s Sir Benfro series, I have finally begun. And while I had originally assumed that if a crime writer also wrote a fantasy series, then it would be YA, and then discovering that it wasn’t and feeling foolish about it, I do feel that Dreamwalker would fit right into the YA world.

This is another novel that was first self-published by James. I don’t know how many changes were made when Penguin bought it, but I am impressed by the quality of yet another, long and excellent novel, written and edited without a ‘proper’ publisher. I’m not surprised the books were popular. 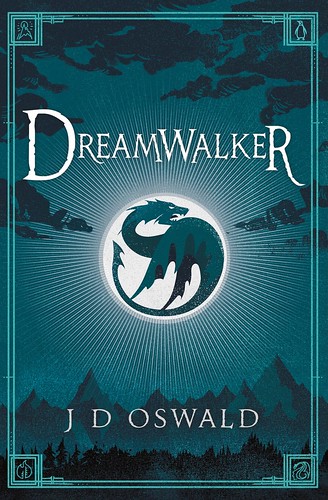 Sir Benfro is a young dragon, and his future co-hero Errol, is a lost human prince and heir. The two meet very briefly at birth, but then they spend their early years apart, while leading really quite similar lives. Both belong to tight-knit communities, and both are brought up by single mothers who work as healers and who are wise in how they deal with their boys.

Sometimes, no, nearly the whole time, it’s hard to tell the boys apart. It’s easy to see that when they finally get together, it could be really special. Although I don’t know this, as I’ve only read the first of the five Sir Benfro books.

It’s not obvious how this is going to go, but I have much hope for the remaining books. And they will have to be taken very slowly…