Lampie and the Children of the Sea

This is such a marvellous story! One of those far too rare, perfect children’s books. And as often is the case these days, it has come from abroad. I understand that Annet Schaap is a well known illustrator in the Netherlands, and Lampie and the Children of the Sea is her debut as a writer.

Lampie lives with her dad in the lighthouse where he is the keeper, and she increasingly has to do his work for him, until the night everything goes wrong. As punishment, Lampie is sent to work in the Admiral’s Black House, across the water from her lighthouse home, where rumour has it there is a monster.

When she gets there, she is not expected, nor wanted. It’s a bad time, apparently. And there does seem to be a monster. 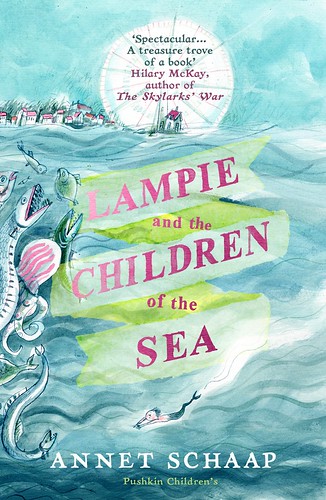 It’s hard to describe what happens, without giving too much away. But there are huge dogs, a backward boy, a circus and lots of pirates. And the ending doesn’t go in the direction I thought it might, and is all the better for it.

Let me just say that I recommend you read this book, and that you give it to every child over the age of eight, or so.

(Beautifully translated by Laura Watkinson, and many thanks to Pushkin for finding and publishing books like this one.)

One response to “Lampie and the Children of the Sea”