‘It was a bit chaotic,’ said the Resident IT Consultant when he returned with the milk and other early essentials. I heartlessly assumed he was just being useless at shopping, but it turned out the holiday ‘super’market was being rebuilt. Hence his difficulty in foraging for food, as well as finding the – temporary – way out again, once he’d paid. 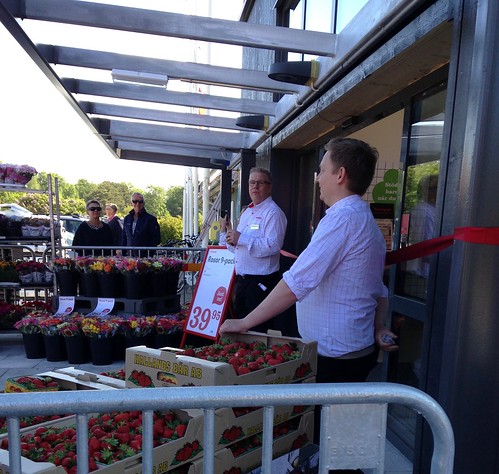 So yes, change keeps a-coming at me. Some days later we popped over to the big opening of the shop, which was mostly finished, with only the one man still hammering away up on the roof. And there was cake after a long waffley speech by Master Koch, the owner, who – now that I think of it – is probably over fifty, but younger than his retired father. 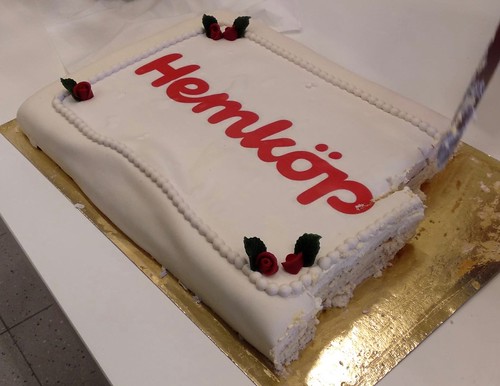 It was the Resident IT Consultant’s birthday and Daughter decided to feed him salmon to celebrate, so off we went to Laxbutiken. Yes, yes, don’t worry. It, too, had changed. New furniture in the restaurant, and gorgeous new marble counters from which to choose your salmon.

Another thing that has changed is that Daughter can now drive her mother places. It’s really convenient. First we went to the optician’s. You’ll be pleased to hear he has not changed. Other than his computer system, which meant that he couldn’t take payment for Daughter’s new glasses, so she was able to walk out without paying. (I think on the hopeful understanding I’d be back with money some other day.)

From there we went to buy bread at the best baker’s in the world. When I showed them my membership card [ it’s a coop] they suddenly charged me less. Not being one to refuse such a thing, I said nothing. I suspect they have changed (yes, there is that word again) from annual dividend payments to an instant 10% off.

Walking through town we discovered the main square had been redesigned. And then came the sad sight of my old bookshop, which is no more.

We were invited to a friend’s house for tea and rhubarb pie. I was a bit surprised, as I didn’t remember her sea view. I mean, I knew she had one. Just not used to seeing it. This is what happens when hedges are trimmed. 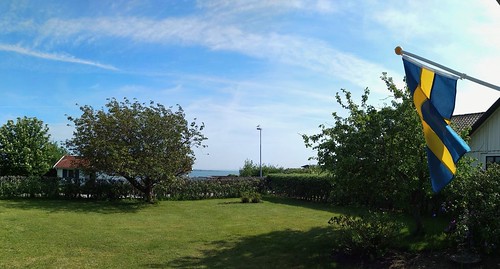 Money is forever a problem. The woman at the flea market looked at my offered two kronor coin and recoiled. Older than me, yes, but presumably a permanent resident, so should be used to the new coins by now. But I know what she was thinking; that I was handing over what looked like the 1 öre from our childhood. That’s how small small change has become.

You might recall I wondered how pay toilets would work after the big coin change. It’s now contactless. Very hygienic and all that. Except my only affordable – currency wise – credit card isn’t contactless. If your need is not too great, you read on and discover that chip and pin will also be tolerated, once the machine thing has had a little think. Some of them even still take coins…

But cash in general has become a problem. It’s not wanted. Many places are card only, or as with Riccardo’s Glass (that’s ice cream to you), you can swish. Except I can’t. I believe Son knows how to swish. I’ll have to investigate further. Anyway, Daughter paid for our ice cream and milk shake with, erm, cash. She said she had the correct change so just did. I suspect that maybe she simply dropped the money and exited, before they knew what had hit them. Or they are more versatile than they let on.

This time last year was hot. So hot we did nothing, and one day that was so hot I lost the will to live. This year I have to say that my padded jacket I wore all through winter has come in quite handy. It sort of averages out.

Holiday Bookwitch Towers has new neighbours. On two sides. I’m not quite sure how to deal with this, but the house opposite has gone from being the neighbourhood dump, to looking so great that it’s a pleasure to look out the window again, 35 years on. Not a moment too soon for this change.

The neighbour on the third side was given some coins, to pay for the life-saving midnight milk, and a bottle of whisky.

Luckily not all is change. Here is what we encountered in the ‘salmon car park.’ The only reason they almost fit is that the parking spaces are huge. 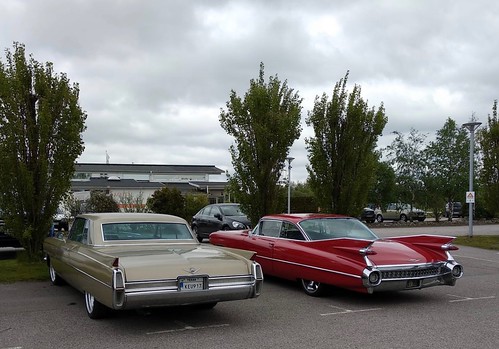 This entry was posted in Blogs, Bookshops, Languages, Travel. Bookmark the permalink.

One response to “And things keep a-changing”