Cymera on the small screen

I have to confess I didn’t know there was going to be live coverage from Cymera on its Facebook page. But it was a nice thing to discover when my knees refused to go out this weekend. Had I known well in advance – about the filming, not so much the knees – I could have planned to make better use of it.

Thus it was that I did that time-wasting staring at Facebook post-cup-of-tea yesterday, and arrived just as Cymera started off on James Oswald, or JD as he was for the weekend, with his Sir Benfro hat on. Not that he wore a hat. But on the very small screen on my phone, the ‘camera eye’ unfortunately sat right on top of his head, leaving only the beard and the pink jacket visible. But I know what he looks like.

(Yes, the image was better on the computer. But it buffered an awful lot.) 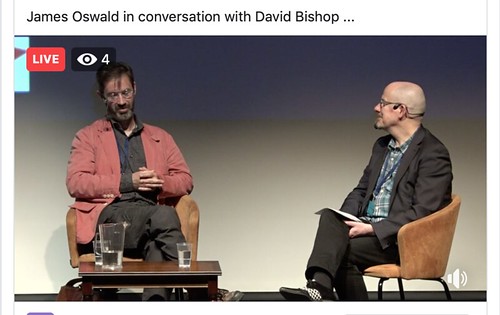 But anyway, I got to see James talking to David Bishop and that’s what I had wanted to do all this time, after discovering he was going to be there, and after reading the first Sir Benfro book.

Much of what he said has been covered in my own interview from four years ago, but I was struck by how James said he now has three books a year to write. Plus being a farmer. And then someone asked what he likes to read! As though the man would have time to read.

Actually, he does, and he listed a number of books, but like me, he forgets immediately, making it hard to recommend books. And he ‘cheats’ by reading audio books when out on his farming duties. It’s mostly fantasy. Seems he doesn’t like reading crime! (So before you send him yet more crime novels for a quote; don’t. Send him fantasy instead.)

There was a somewhat abrupt end to the filmed event, but it was far better than nothing!

Below is the ‘only good’ photo Clare Cain got of the Ghost event with Claire McFall, Rachel Burge and Helen Grant chatting to Sarah Broadley. I imagine they are hearing ghostly voices there. Or something. 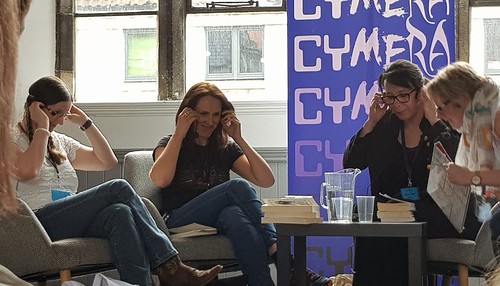 And even more below, is another stolen photo from Sunday morning’s event where Moira McPartlin chatted to Sarah Broadley [Sarah does seem to be everywhere, doesn’t she?].