I loved this book by M M Vaughan, and couldn’t wait to finish it to find out how and what. However, I was also very confused, because it reads like an American children’s middle grade book.

It had first been published in the US, under a different title, and I assumed the reference to flats, mum and London was an attempt to make it more UK friendly (as though British readers couldn’t cope with Americanisms). But it seems M M lives in Britain. So I’m still puzzled. On the other hand, I am a stupid adult and presumably a child reader would simply get on with enjoying this very exciting story. 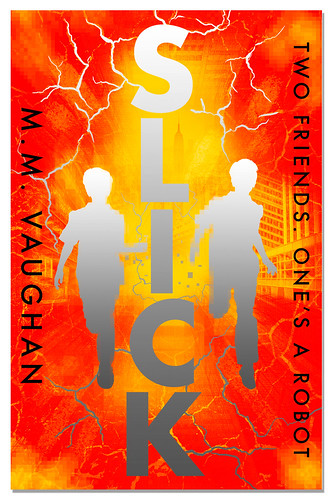 So. Eric is new at school. He is also a robot, except he has no idea. (If he wasn’t a robot I’d put him on the autistic spectrum.) So he’s clever, in some ways, and clueless in other ways. He wants to be friends with the popular boys and he wears designer clothes, which is really important to him.

But against his will, almost, he becomes friends with unpopular Danny. Really good friends. They share the same hobbies and hang out all the time.

But. You know this can’t end well. Can it? Eric’s parents are far weirder than he is. (They are also robots, if you hadn’t worked this out.) Danny is puzzled, and starts investigating, and he…

You want it to be realistic. Well, as realistic as any book about robot boys can be. But it’s also a story for younger readers and you need for it to end a little bit well.

Read it and see!