Malorie Blackman apologised for sounding a bit Darth Vaderish (sore throat), but the audience in the full New York Times Main Theatre didn’t mind. We’d come to hear about Malorie’s new book Crossfire, the fifth book in her Noughts & Crosses trilogy. Or the second book in the second trilogy, whichever you prefer.

The title above refers to how Malorie sees life in Britain today. Not being black, I’ve only been able to guess at how the last three years have played out, and it’s dreadful to have it confirmed. In the YA world she’s a star, while outside it she’s black. Or, as readers have said about her Noughts & Crosses books, ‘it’s about Ireland, isn’t it?’ Or Israel. Or anywhere else where you have two opposing groups of people. 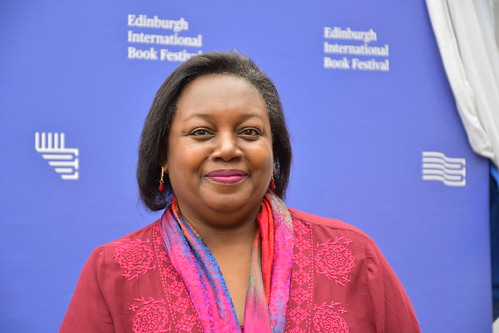 Malorie was in Charlotte Square talking to Lindsey Fraser about her dark, but necessary, books that first arrived in 2001. And here we are – needing them more than ever – eighteen years later.

As Lindsey pointed out, you have to think when you read her books. Books written by someone who as a girl couldn’t afford books, so went to the library where she tried to make her weekly selection last the whole week. She at first found Jane Eyre a bit dry, but it’s long since one of her favourite books. 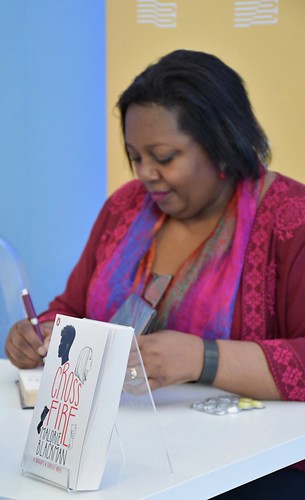 We will soon be able to watch a six-part series on television, and we were the first to be shown a video clip from it. Stormzy has been involved, somehow, because he’s a big Noughts & Crosses fan, just as Malorie is a big Stormzy fan.

There will be one more book, Endgame, the sixth of the trilogy, and then she ‘must stop.’ Malorie doesn’t want to write a prequel, but admits to having considered it. She reckons Jude is ‘a bit of a git,’ but he was fun to write. She wants her readers to understand why he did what he did, while not sympathising with what he ends up doing.

Having been prevented from going to university by her careers teacher, Malorie now feels that the woman actually did her a favour, teaching her not to give up when the rejection letters kept coming. 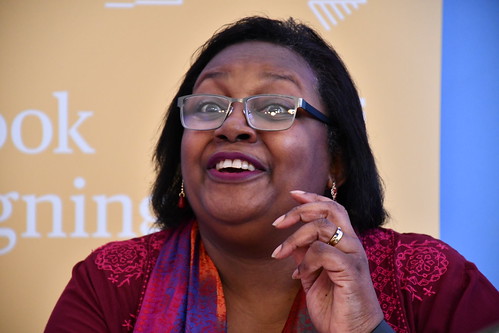 And much as I and the rest of the audience would have wanted a literary university experience for young Malorie, we are grateful for the books. And for being a role model and for giving young, black readers a sense of belonging.