It’d be easy to believe an event like Sheila Kanani’s about how to become an astronaut, aimed at young children, wouldn’t be of interest to an adult. And that’s where you’d be wrong. 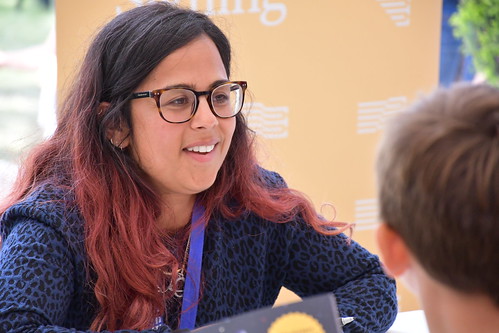 I have no wish to change careers and travel to Mars, unlike some of the children in the audience, but just hearing about what it could be like and what you need to learn, was Very Interesting. I knew Sheila does a lot of outreach in her job for the Royal Astronomical Society, but I hadn’t paused to consider what it might entail. Or that she’d be so good at it.

Chaired by Sarah Broadley, the session offered tables for the children to play at astronaut training with oven gloves, long colourful strips of rubber, pink rulers, headphones, Russian codes. And scissors. There were not enough tables, so more had to be found. The balance between the sexes was good, and you could tell these were young human beings who’d thought about space and travelling to Mars.

In real life you have to be at least 27, speak Russian and have a good idea of what to do when your helicopter is crashing. And if you make it all the way, you have to go to the toilet using a tube contraption thing, and for those of you who have wished upon shooting stars, you might not want to know that it could have been astronaut poo entering the atmosphere.

Before the hands-on play, we’d turned a water melon into Jupiter, with poor little Mercury represented by a peppercorn. Earth is a cherry tomato. 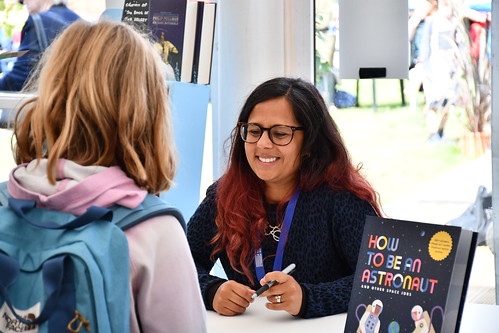 Sheila, whose favourite planet is Saturn, wants to make people more enthusiastic about space science. She asked if anyone felt that it was a waste of money to invest in space research. One or two did, and they were gently told maybe they were in the wrong tent…

So, for anyone who wants to be a space vet – for the animals in space – or any of the other jobs ‘up there’ you know what to do. Start with Sheila’s book How To Be An Astronaut, and then get to work on your dexterity while wearing oven gloves.

One response to “Blast Off!”