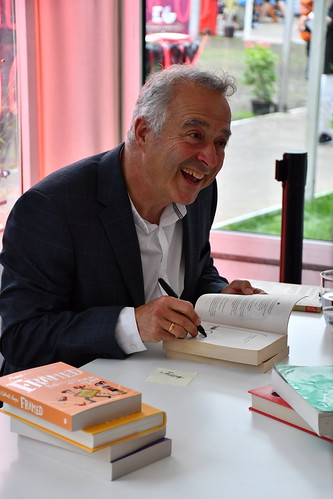 During the signing in the bookshop after Frank Cottrell Boyce’s event, I was reminded that he’s used to having people trying to get close by crawling under tables. In this case it was young fans who wanted a photo with a much admired author, while I’m remembering the bookshop owner who wanted to invite him to do an event…

Frank knows how to entertain his fans, and this turned out to be my second astronaut and space related event in one day. Having been introduced by Lindsey Fraser, he read from Runaway Robot, having first told us about lost property, which can be anything from your umbrella to a lost hand. And when you find it – the hand, I mean – it’s not necessarily yours.

He also told us the ‘story of the magic haddock.’ And there was something about a wandering pizza bot, which he did with a good Italian accent.

The questions that followed weren’t always the most original, but Frank answered them politely, with kindness, although he turned down the opportunity to help one boy with writing a book. We must have had some moon-deniers in the audience, but Frank was able to deal with that by talking about Alan Bean, the fourth man on the moon. 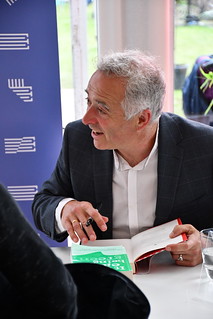 More reading from Sputnik’s Guide to Life on Earth, the lightsaber birthday party episode. This was followed by more fun questions, the best of which was ‘what is your favourite pizza topping?’ Frank did a quick check to see how the audience felt about pineapple, before admitting to liking anchovies and capers.

Second best question was ‘how much books have you read?’ Frank wasn’t sure, because he always reads. When he was asked whether he has started his next book yet, Frank felt this confirmed that his publisher had planted questions in the audience. He has ‘honestly’ just started, and won’t be late this time…

To finish he read from Cosmic, the bit where Liam starts secondary school. The he’ll ‘tell them after the biscuit,’ is a good way of deciding when to own up to not being the new teacher.

And then it was book signing in the bookshop, and children crawling under the table (which to my mind needs more space around it). 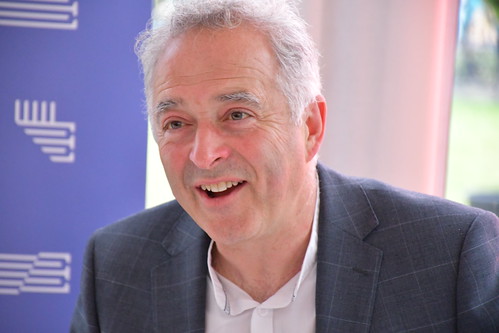