Balloon to the Moon

There are a lot of crazy people in this world. There always have been, and that’s lucky, because where would we have been if no one had crazy ideas and tried them out? 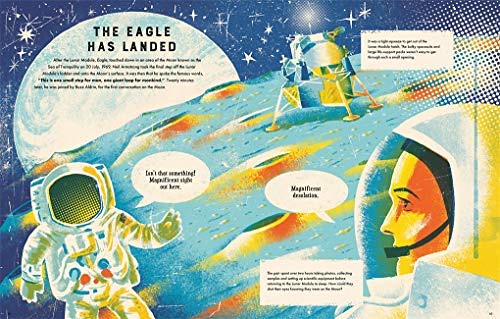 Gill Arbuthnott has traced the early days of space flight, which seems to have been balloons, several hundred years ago. Who’d have thought?

Even then, they started cautiously by sending a sheep, a duck and a chicken, rather than humans, up in a balloon in 1783. And after that there was no stopping them.

This book is illustrated throughout, by Christopher Nielsen, and I rather like his snakes and ladders approach to showing how what happened and when. It all began with kites in China in the 5th century BC. And here we are, two and a half thousand years later with a Chinese space probe on the ‘wrong’ side of the Moon.

In between there were many men, but also quite a few women doing daring things, and various dogs and monkeys and other animals.

It’s funny how it’s possible to get excited about a thing – in this case space exploration – over and over again. No matter how many books, it’s still fun.

I thoroughly recommend this book to, well, almost anyone. You don’t have to be a child. Like Gill, I was a child in 1969, and it seems neither of us has outgrown this fascination for space. I feel sorry for those who didn’t experience these milestones in real time. But here’s this book, anyway. In case you are young.